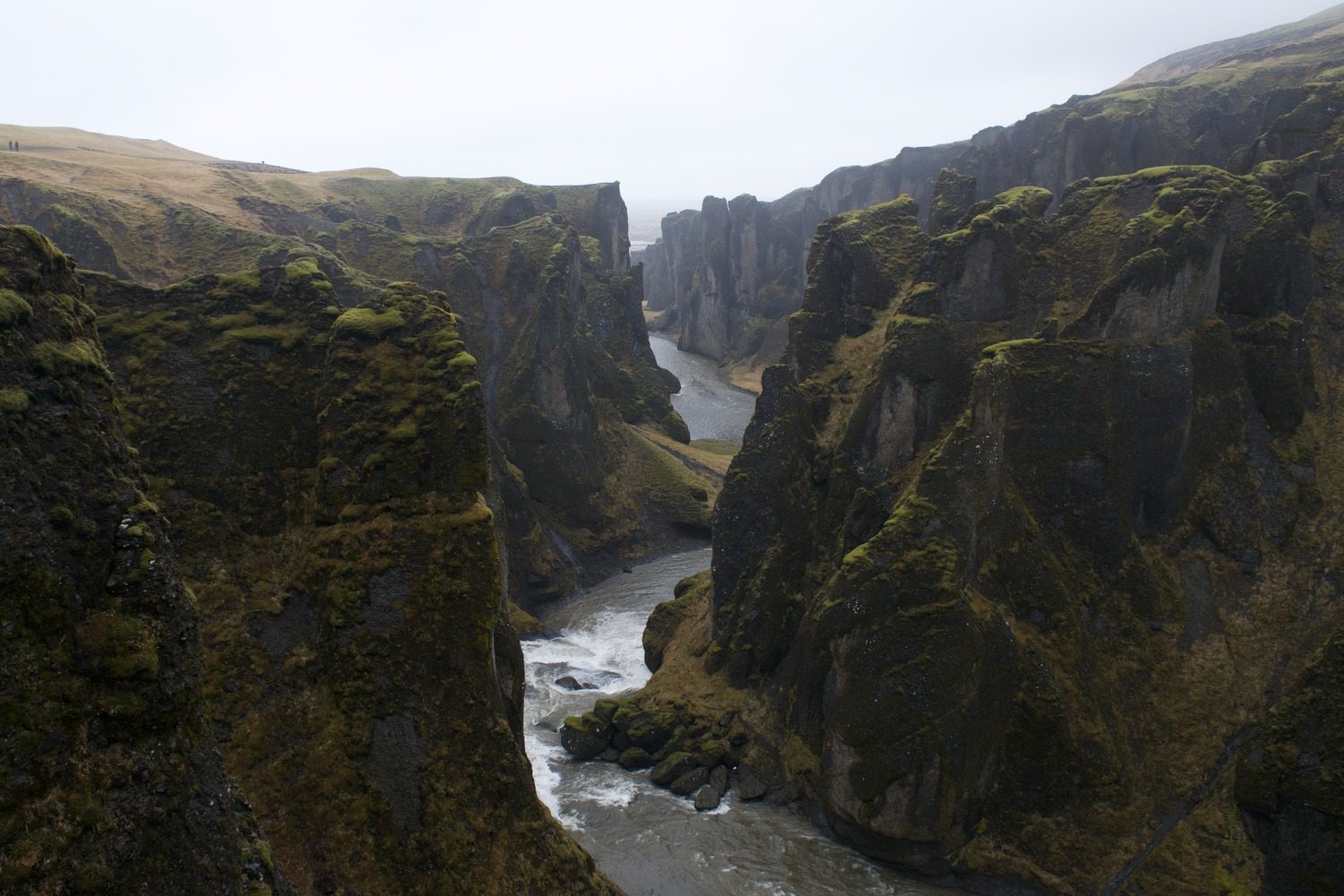 DAY 2: THE SOUTHERN COAST OF ICELAND With the exception of maybe Day 6, Day 2 was in my opinion the most magical of our days in Iceland. We started early, eating breakfast at the breakfast buffet, which was served in the attached Berg Restaurant and had the largest array of options on our trip. At about 8:00 am we headed out from the hotel into the wind and rain. We were spending the night at the same hotel, so we had no need to go through the check out process. Our first stop of the day was Dyrhólaey to see the arch. This was around a 15 minute drive from the hotel back on the Ring Road towards Reykjavik. I was under the impression that we park, take a quick walk to the arch, look at it, and then turn around and head back. I was completely wrong. We parked and immediately heard violently crashing waves and saw multiple paths leading off in several directions. We took the left path and walked alongside a cliff face, watching the incredible power of the waves crashing on the black sand beaches. Then we went back towards the car and stopped at a red and yellow warning sign noting that the area was very dangerous and not to venture further. Directly beyond the sign was what appeared to be the calmest section of beach in the Dyrhólaey area. Waves still lapped on the shoreline and the white foam made a strongly stark contrast between the black sand. The image to the right is full color. That’s what the scenery actually looked like. We then ventured straight ahead up a small hill to an overlook. To the left of this overlook was a small lava rock arch. Every 15-20 seconds, a wave would come crashing upwards through the archway and deluge water far up into the air like a water cannon. It was one of the most surreal experiences of our trip, and gave warning to the true extremity of the forces of the water on the Southern Coast of Iceland. After spending some time taking photographs and videos, we ventured to the right, on a path made from small lava rocks leading up a hill. We hiked for approximately a mile and a half uphill before we passed another tourist coming in the opposite direction. The entire time we were bordering the cliffside, and were heading towards the white and orange Dyrhólaey lighthouse. Turning around at this point gave us the full viewpoint of the crashing waves on the shoreline, even in the heavy fog. Eventually we reached the Dyrhólaey Arch. The arch was massive, with thousands of birds nesting on its cliffs. Further up, more tourists began filtering down from a tour bus that had departed from Reykjavik. At the top of the hike was the lighthouse in all its splendor. Off in the distance was miles and miles of untouched black beach hundreds of feet below. Tourists were crossing the barriers to get as close to the cliffside as possible, tramping on all the grass and foliage. The way back down was relatively treacherous as far as our Iceland experience had been thus far. Loose lava rock mixed with rain and a steep downhill led to a slow descent back to the Subaru. Overall, what I thought would be fifteen minutes or so of exploring had quickly turned into a two and a half hour excursion. Once we arrived back at the vehicle, it was around 10:30 am, and the circular parking lot was beginning to pack up. Our next stop was the Reynisdrangar beach area. This was a place where we could actually get down onto the black beach itself. We parked near the Black Beach Restaurant as the rain temporarily subsided and navigated through tourists to the beach area. We were immediately greeted with massive basalt caves and sea stacks. We had recalled articles about people getting swept away in the rogue waves of Reynisfjara, so we kept our distance and watched as unsuspecting tourists were soaked with surprise waves. The caves were incredible, and the sea stacks were great places for pictures. The volcanic rock columns were a wonderful sight to behold as well, and on the distance to the west we could see the Dyrhólaey Arch jutting out into the sea. After Reynisdrangar, we headed into the crowded but fast-service Black Beach Restaurant for lunch, where we both enjoyed hamburgers and waffle fries and shared a slice of Skyr cake. We spent the remainder of the vacation to Iceland with a mission to try and find an even better slice of Skyr cake, but we were unlucky in our pursuit in several other cafes and restaurants. Our next stop was the frequently-photographed Fjaðrárgljúfur. The drive took about 45 minutes from the Reynisdrangar area, and had us pass Vik and continue on the Ring Road for quite a few kilometers. On our way there, the rain came back and began to pour.

We walked to a nearby bridge with an incredible view of the canyon stretching out into the distance and I snapped a picture with my camera safely tucked in my rain jacket. Then the rain became torrential and we ran back to the car to wait out the weather. This was the worst rain-based weather we experienced on our trip, and lasted about 10 minutes. After the worst of the rain had passed, we headed up the right side of the canyon. The pathway, though washed out, had a solid gripping base of mesh, so traversing it was no problem. Even with the torrential downpour there was a solid smattering of others around. Many people were crossing over the rope boundaries to get onto the wet, mossy ledges. The winds were high, and we were just bracing ourselves to see someone fall off the cliff. Luckily, nobody did. Continuing to the very back of the marked trail, we ended up at a massive, thin waterfall and a steel hanging overlook. The total walking time from the parking lot was about 30 minutes with several stops for pictures. The overlook allowed us to go to the edge and look out in the middle of the canyon in the direction of the parking lot. The cliffs were several hundred feet high, and the entire experience was very surreal. After Fjaðrárgljúfur, we turned back and returned to Route 1, traveling a few kilometers further out until we arrived at Systrafoss. Systrafoss is typically running either very slowly or not at all. As it had rained the past few days, we hiked up a slight hill and behind a massive rock was a wonderful dual waterfall (Systrafoss is Icelandic for “sister falls”). A small network of trails ran back behind the falls, outlined with red, green, and yellow blazes. This is one of the few places in Iceland where hiking can be done right off the Ring Road with trees. On the green blaze trail, we happened across the unofficial “tallest tree in Iceland”. We also took the yellow blaze trail for a little while to the top of a steep staircase. The image to the right is the view from the top of that staircase, which was a little over halfway up the yellow-blazed trail. At this point, the rain was becoming heavier, so we retreated to the car to head off to dinner. Dinner was at Halldorskaffi in downtown Vik. The restaurant is also in a cozy setting, and the entrance is difficult to find. The building the restaurant sits in is in the middle of a residential area of Vik, close to the coastline. After a relatively underwhelming pizza the night before, and being too exhausted from all the hiking of the day, my wife and I both got regular pizzas with pepperoni and mushroom. The pizza was delicious!

As with the previous night, once we were done eating, we returned to the hotel for the night and slept until 6:00 the following morning.