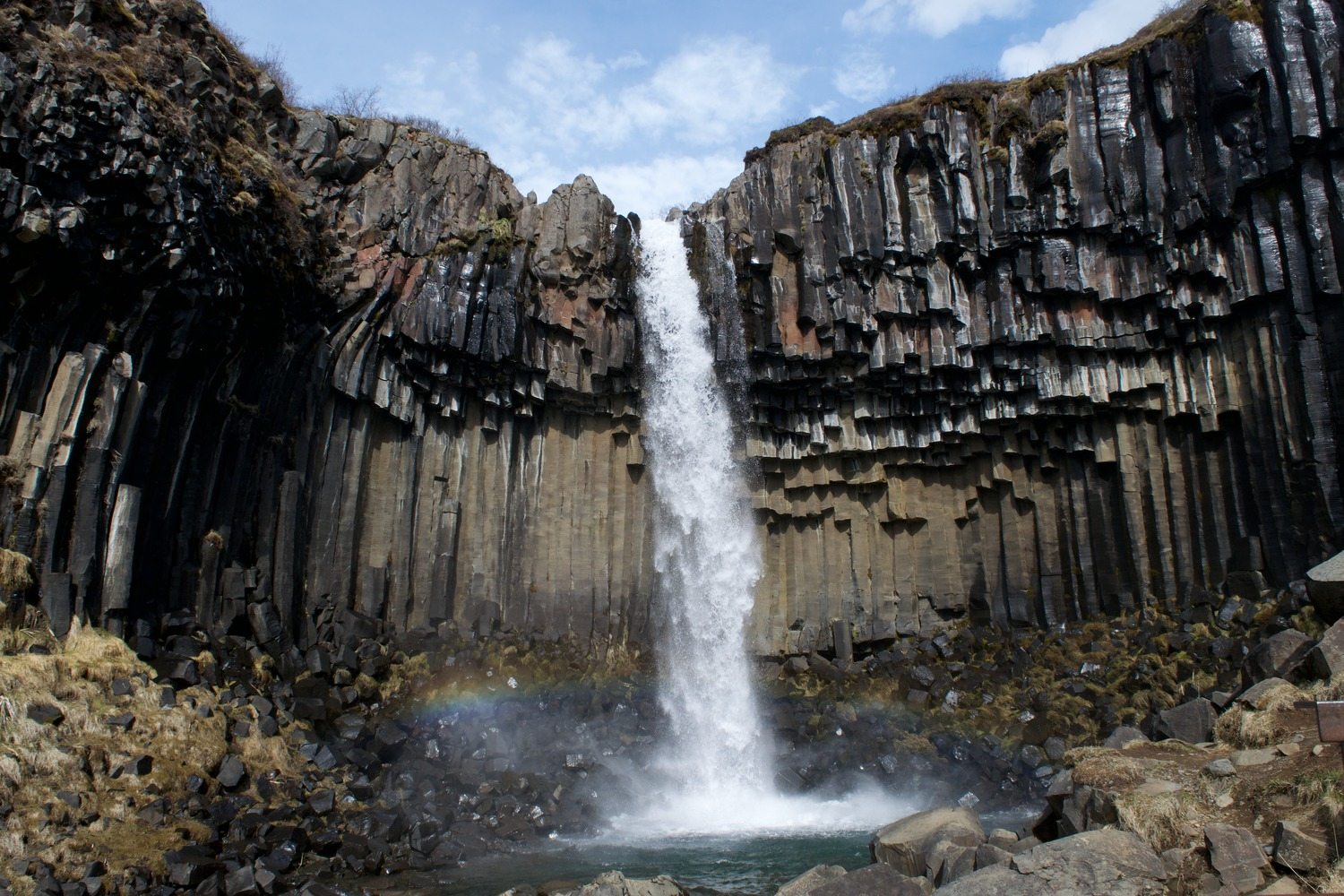 We started out our day nice and early again. The rain was still falling, as it had for the strong majority of our trip at this point. After another wonderful breakfast buffet from Icelandair Hotel Vik, we packed up our things, checked out of the hotel, said goodbye to Vik (the only town we had really experienced thus far on our Iceland journey), and headed off down the Ring Road back towards where Systrafoss was located the day prior. It was located right off of Road 203, with a small parking lot, back about 1500 feet but visible from the road. You walk alongside a stream, and can get closer to the Systrastapi waterfall than most other easily-reachable falls in Iceland. If you look to the right on the way to the falls, you can see some large boulders that have rolled down the mountainside due to the winds and weather. After departing from Systrastapi, we continued on the Ring Road down to the entrance to the visitor’s center of Skaftafell, at the base of the Vatnajökull glacier, the largest in Iceland. The sun finally came out, and after deciding to do the hike to Svartifoss instead of the hike to the base of Vatnajökull, we started up the mountain to a black basalt waterfall two and a half miles uphill. Halfway up the trail, the temperature had easily gone up 20 degrees from when we were at the parking lot. We were shedding layers like crazy, and sweating as we continued our climb. Shortly after the halfway point we came across a smaller, yet still incredible looking waterfall named Hundafoss. Tourists were on the edge of the falls, hanging their GoPros over the end to get better video footage. We continued up the trail, and the area began to top off. A clearing appeared, and we found ourselves staring at the Vatnajökull in the distance, an extremely stark contrast to the grain-colored surroundings. As we continued on the trail, it began to get rocky and started sloping downhill. Eventually, Svartifoss was visible in the distance, even more stark a contrast than the glacier. The basalt columned area appeared to have been scooped out of the side of the mountain. There are a network of pathways, overlooks, and platforms all over Svartifoss. The closest of which is a raised platform on the right side of the waterfall. That is where the majority of our photos were taken, including the one on the thumbnail to the left, which I would call one of the top 5 best pictures we took on our journey. After enjoying the platform’s view, we started across the bridge behind the platform to get a better long-distance viewpoint, but tourists going beyond the platform to the waterfall base obscured the images. On the way back to the visitor’s center, we enjoyed the downhill focus on the hike, and once we returned to the base of the hill, the vast greenery and picturesque setting of Skaftafell truly set in. After spending two rainy days in Vik, and mostly being around shades of black, white, and grey, it was refreshing to be around all the color in the scenery. In the distance was the base of the glacier. After grabbing some Skyr and beef jerky from the visitor’s center, we continued down the Ring Road towards Jökulsárlón (Glacier Lagoon), one of the most visited and highly photographed locations in Iceland. On our way, the temperature dropped rapidly. By the time we arrived at the parking area, it was under 40 degrees once more. Glacier Lagoon (as well as Diamond Beach) is at the base of the Vatnajökull glacier, but about 45 minutes from Skaftafell’s visitor’s center. When traveling counter-clockwise around Iceland, there is a parking area on either side of the road before the bridge, and on either side of the road after the bridge. We stopped at both spots before the bridge, as well as the spot to the left after the bridge, which was the main Glacier Lagoon parking area. At the lot across the bridge to the left, we got incredible views up the lagoon. The glaciers were mainly scattered close to the bottleneck, but far up the lagoon in the distance we could see Vatnajökull. It was incredible realizing that these floating blue, gray, and striated black chunks of ice had recently snapped off of the edge of the glacier and were slowly floating across the glacial runoff lagoon into the ocean. After a few minutes enjoying the sights, we then went across the bridge and across the street to the parking area for Diamond Beach. This black sand beach is littered with small and large glacier pieces of all shapes, sizes, and colors. From clear and colorless to bright opaque blue to grey with striations of black to glassy with small spikes coating the surface, this area had an incredible array of glaciers. What made this place special was not only being able to touch the glacier pieces, but also that no two trips would provide the same viewpoint. The glacier pieces we saw on our trip would be melted and replaced with new chunks within a few weeks. It was also here that we were able to see the strength of the water flow in the lagoon, as massive glacier chunks would drift by out to sea. After spending a good bit of time wandering amongst the chunks of ice, we went across the street to the third parking area, back on the side of the Glacier Lagoon. While the viewpoint up the lagoon was similar to what it was across the way, here we were able to watch an interesting natural phenomenon. See the flat white ice piece in the image to the left? About 30 seconds after that picture was taken, another chunk of ice, rapidly pushed by the current, slammed into it with a loud scraping noise and cracked the ice shelf in half, which proceeded to push both the fast-moving ice chunk, the white half that broke off, and the large, clear blue glacier piece off to sea. As I said, no two trips would provide the same viewpoint! Once we were done visiting Glacier Lagoon, we drove for a little less than an hour along the Ring Road to Fosshotel Vatnajokull, where we had a room for the night. The hotel was the only thing in the area, and the lobby was quiet, snug, and inviting. We were informed on our arrival that we had been upgraded to a deluxe room for free. What that meant I was unsure, but while the room had all the necessary amenities, it was incredibly small. The view, however, was unbeatable, a picturesque panorama of jagged mountain peaks. After checking in, we ventured into Hofn, where we ate dinner at Kaffi Hornid. Service was subpar. The waitress seemed more interested in her phone and co-workers than providing customer service, even though we were the only patrons in the restaurant. the food made up for the lack of service though. The lamb was amazing, and my reindeer burger was packed with flavor. The curly fries were a nice touch as well! When dinner was over, we stopped at Netto (the local grocery store) and grabbed a few things, including more Skyr, some local jelly, gum and bread. Then we parked the car and walked along the shoreline, on a pathway right alongside the ocean. The views were great, and it was a nice break from the tourist-packed adventures of the day. While walking we passed a good number of beautifully-colored houses and businesses. Thoroughly exhausted, we drove back to the hotel and retired for the evening, enjoying the view from the sliding glass door and researching the long drive ahead in the following day, from Hofn all the way to Myvatn, venturing up the entire East coast of Iceland.