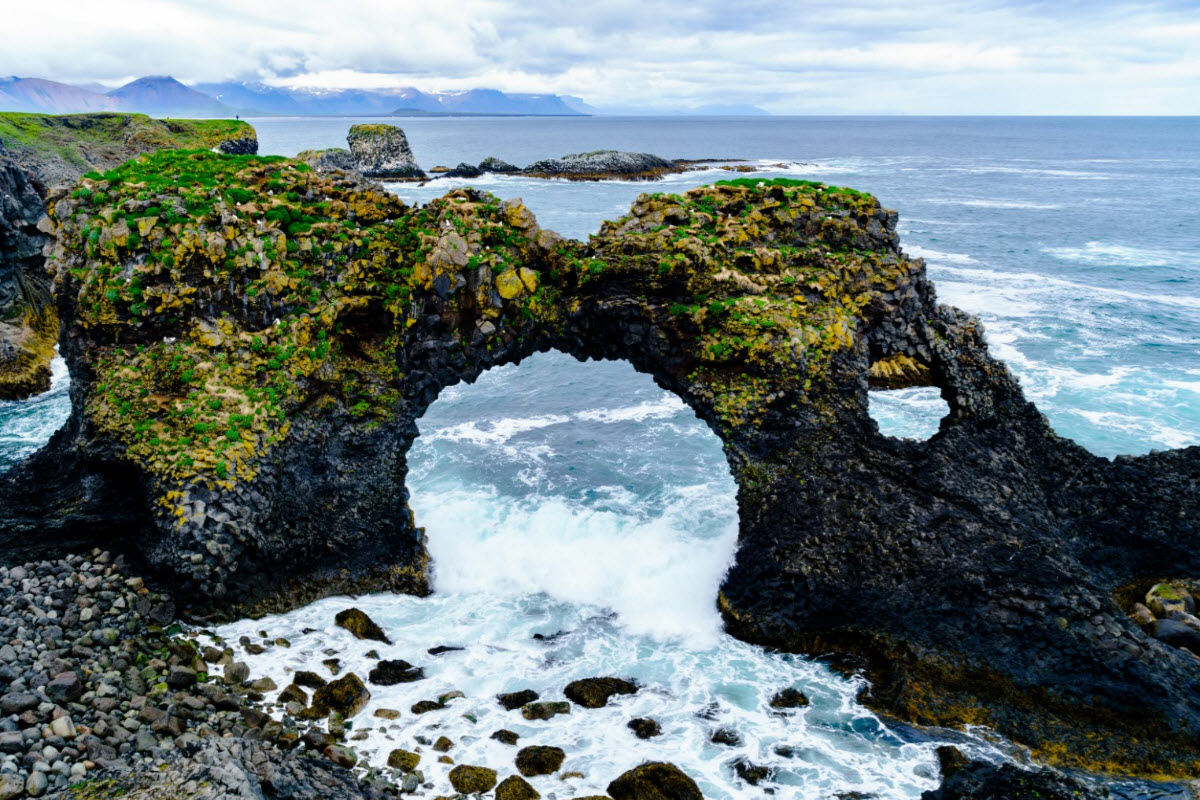 Iceland is one of the most beautiful countries in the world. It’s cold, stunning beauty is unparalleled. Large mountain ranges rise out of the snow and black rocks of the Snaefellsnes Peninsula.

A large pocket of magma lies beneath Iceland. Around 70 million years ago, this island rose up out of the sea in a great volcanic eruption. Since then it has been steadily rising.

Views from the Snaefellsnes Peninsula

Pure serene beauty. There is no other way to describe the volcanic Snaefellsnes Peninsula that reaches out of Iceland’s west coast like an icy finger plunging deep into the cold Atlantic Ocean.

This is a place of myth and legend. Viking Northmen called this harsh and beautiful land their home, the place where the Nordic gods of old waged their wars. Perhaps they did.

It’s known as a mecca for hikers and mountain climbers alike. However, few people know of this stunning peninsula. It holds a great many hidden gems for those willing to travel a little out of their way, and a few hours off the Ring Road.

Below, we have compiled a list of some of these natural attractions on the Snaefellsnes Peninsula. If you’re planning a trip to Iceland, you’ve got to put these on your itinerary. They’re well worth the extra drive, and you’ll be rewarded with absolutely beautiful views along the way.

Upon arriving here, you might be a bit perplexed. At first glance, all you’ll see is an 8-foot tall metal cylinder standing out like a sore thumb. This, however, is the doorway to the Vatnshellir cave. It was put there to prevent farmers from falling into the hole while they were walking in the dark. This cave is a lava tube that cooled down and formed around ten thousand years ago.

Entering the cave, you’ll descend about 10 meters down a winding staircase. You’ll then be met with a cavernous natural opera house. There are rocky shelves surrounding a sort of natural stage, lots of stalagmites sticking up out of the floor, and a bunch of strange obsidian formations. Keep in mind this is a cave, so be sure to bring a bright flashlight!

Note: Currently the Vatnshellir Cave is only viewable after booking a tour.

If you’ve ever read Jules Verne’s Journey to the Center of the Earth, then you’ll recognize this location. It is the last place the stories’ heroes stop before beginning their great journey. Arnarstapi is a small fishing village with a busy harbor on the south shore of the Snaefellsnes Peninsula. It’s a nice little place to walk around, and you’re guaranteed to find the best fish soup of your life there.

If you wish to venture outside the village a bit, there is an old horse trail that leads to a natural preserve by the coastline. Here you’ll find some truly unique rock formations and arches. Just don’t fall off the cliffside! Kirkjufell means church mountain in Danish, named so because it appeared to be a giant church reaching into the sky. Some say it’s the most beautiful mountain in all of Iceland. It is 453 meters high, and if you’re an experienced hiker, it’s a great climb. From the top, you’ll be able to see for miles around you. It’s an unforgettable experience. At the foot of the mountain there lies a small but powerful waterfall which is called Kirkjufellsfoss. This falls into an icy pool which continues into the ocean. There is so much open green land around this area, and if you come at the right time of year, you can catch the beautiful northern lights display in the sky.

Read more about these in our article Exploring Iceland 101: Kirkjufell and Kirkjufellsfoss.

This is a real hidden gem. The Rauðfeldsgjá gorge is a place that is known in local legend for murders and other dark stories. It is a really fun place to explore. You’ll enter through a small rocky crevice, and walk into a cave where you’ll be able to see open sky ahead. If you’ve got the proper gear and a wit to match, you can explore further into the mountain.

If you’re looking to be impressed, then Snæfellsjökull will not disappoint. It is a 700,000-year old volcano that’s topped with a giant glacier. There’s a large natural park surrounding this stratovolcano. It last erupted around 200 years ago. It’s also the entrance to the center of the world in Jules Verne’s Journey to the Center of the Earth.

If you’re in for a hike, then there are quite a few trails up the great slope. If you’re not up for that big of a hike yet, the natural park is absolutely breathtaking. Rolling green hills by the seaside look like something out of a Van Gogh painting. For a while, this church had its parish revoked by the Lutheran church. However, in the early 1800’s one woman protested and brought the case before the King of England and gained permission to rebuild the church. This church stands as a monument to the strong spirit of Icelandic women.

Helgafell is a small 73-meter mountain in the center of Snaefellsnes. It is most well-known for the temple built in honor of the Norse god of thunder, Thor. One of Iceland’s first settlers built a temple in here long ago, that has since fallen into ruins. The site was home to a monastery during the middle ages and has been a church for a while since. Many people who still believe in the pagan ways, will journey to the foot of this mountain and make a wish to the old Norse gods.

Hopefully, we’ve been able to convince you of the beauty of the Snaefellsnes Peninsula. It truly is one of the most beautiful places in the world. The harsh volcanic landscape, the glaciers, the small fishing villages, and the rolling hills all contribute to the ultimate traveling experience.

The Icelandic culture is one of strength and endurance against the harshest of elements, and yet the people are surprisingly warm. If you’re a hiker and want to enjoy this extreme landscape, then the best place to visit is the far western peninsula. You will have the journey of a lifetime, and it won’t be long before you find yourself back on these strange shores.