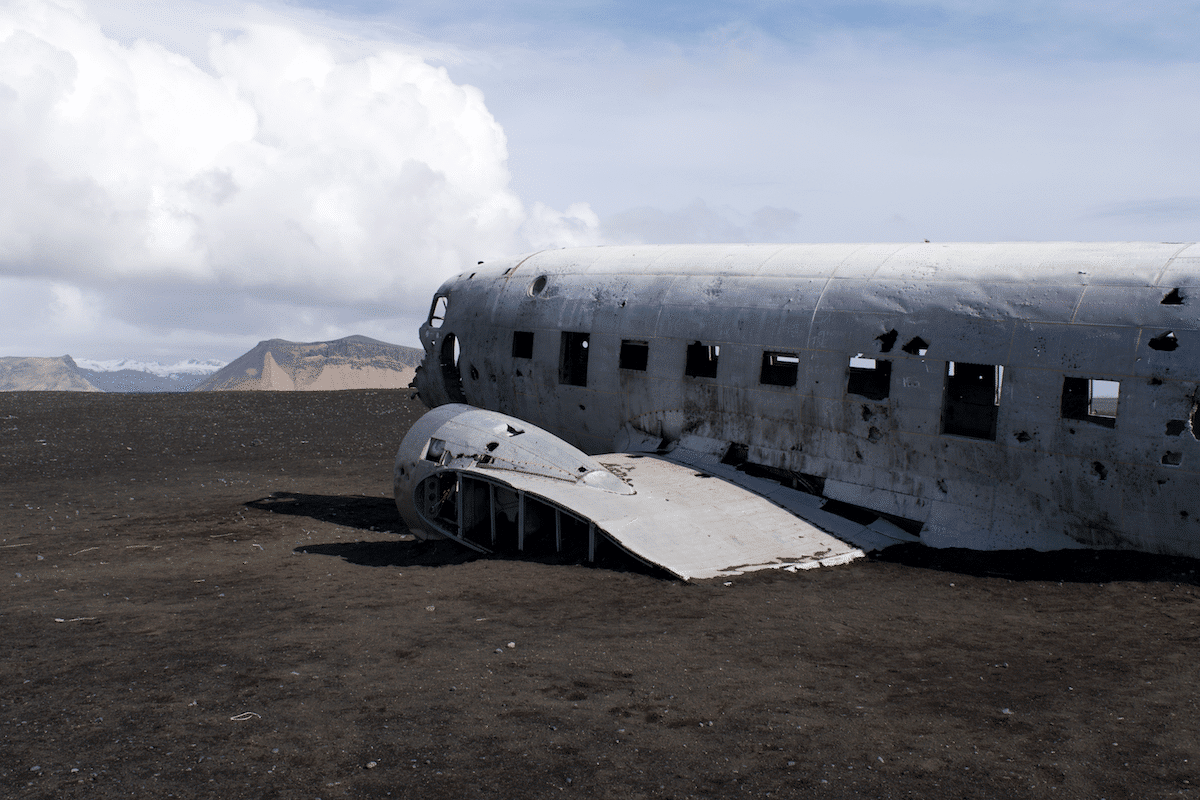 DAY 1: OFF THE PLANE AND INTO THE WATERFALLS Our plane was scheduled to land at the Keflavík International Airport at 6:45am on April 29th, 2017. We flew in on Delta Airlines Flight 446 from New York City. It was the end of April, but it was snowing when we landed in Iceland, after a relatively sleepless six hour flight.

The snow was initially concerning to us, and the weather worsened as we grabbed our bags and exited the airport. We rented a Subaru Forester through Iceland Car Rental, which was located in a large warehouse on the opposite side of the airport. A yellow bus arrived and shuttled us to the rental car areas, where within ten minutes we were sitting in the car figuring out the controls. We drove towards Reykjavik to pick up a 4G WiFi hotspot from Trawire ($90 USD for the eight days we spent in Iceland). While pickup is offered at an N1 station in Keflavik, the N1 Laekjargata Hafnarfjordur was a 24-hour option. We then got back on the Ring Road and drove south towards Vik. On our way, the snow began to dissipate, and a few miles after the image on the right was taken, there was no snow in sight. Our first actual stop of the trip was Urridafoss, the most voluminous waterfall in Iceland. We were one of a few vehicles there, and the view was incredible. The waterfall itself was more in line with a massive rapid on a very wide river, but it was awe-inspiring nonetheless, and the sheer size and sound of Urridafoss was a force of nature in itself. This waterfall is about a half mile down a dirt road right off Route 1 (the Ring Road). If you are traveling to Iceland, I highly recommend seeing this waterfall, as a proposed hydroelectric plant, once constructed, will cause Urridafoss to dry up. Our next point of interest was the Seljalandsfoss waterfall. Seljalandsfoss is likely the most photographed waterfall in Iceland, which makes sense, as it is the first large attraction driving south on Route 1 out of Reykjavik. The falls can be seen on the Ring Road from about three miles out, and in summer months can be walked behind for picturesque views. When we arrived, the water was flowing very heavily. As were the tourists. With the heavy water flow, the rocks behind Seljalandsfoss were extremely slippery, and we did not end up getting to the very back of the waterfall. There was a long line of tourists to get to Gljúfrabúi (a nearby waterfall that falls into a cavern accessible via a small stream), so we skipped waiting and instead continued on our journey. Before heading to Skogafoss, we ate a delicious (first Icelandic) lunch at Center Fossbúð. Center Fossbúð was within walking distance to Skogafoss, and sold a variety of cafeteria-style entrees, salads, sandwiches, and desserts. We both had the fish and chips, and it was alright. There was a tour bus of elderly people eating quietly at four long tables off to one side, so service was incredibly slow. The next point of interest was Skogafoss, another extremely highly-trafficked waterfall in the South of Iceland, right off the Ring Road. Skogafoss differs from Seljalandsfoss in that it is wider, cannot be walked behind safely, and has a stairway that leads along the right side of the waterfall to the very top. There are several hundred steps leading to the top of the waterfall, and the view from the top is incredible. There is an overlook, shown in the image to the left, and the river continues back along the summit and can be followed back a good ways. After Skogafoss, we were quite exhausted, so we started to head towards Icelandair Hotel Vik for the evening. On our way, we happened upon a parking lot on the right side of the Ring Road. In the distance was the beach, our first real glimpse of it. We parked and started walking. After close to 30 minutes walking, I realized that we were headed towards the Solheimasandur Plane Wreck. After two and a half miles out, you crest a small hill and arrive at the scene. Much like the other attractions of that day, the wreckage was crawling with tourists. We spent a few minutes getting some good angles without tourist interruption, watched as some ATV riders whizzed past on the beach in the distance, and then headed back to the car. It was another fifteen minutes or so to Icelandair Hotel Vik to check in.

The hotel in Vik was (in our opinion) the most modern of the hotels/cottages we stayed at on our trip. The price reflected this, as rooms here were close to $275 per night, even with months’ notice in the mid-season. But they were the only game in town outside of hostels and guesthouses. The room was fairly large, and the bathroom was one of the nicest bathrooms I had ever seen. Our room faced a cliffside, and we saw many seagulls nesting in the cliff face.

After checking in and finally getting showers, we went for dinner at Suður-Vík Restaurant, which was within walking distance from the hotel. The restaurant was on the second floor of a guesthouse, and was very cozy. Here is the menu (Facebook images). We had the mozzarella cheese sticks, my wife had the steak sandwich, and I had a pizza with pineapple and ham (for the first time ever). The pizza tasted relatively generic for the price point (we hadn’t gotten used to Icelandic food prices at this time), and the sauce with the cheese sticks was salsa.

Once we were done eating, we returned to the hotel for the night and slept until 6:00 the following morning.