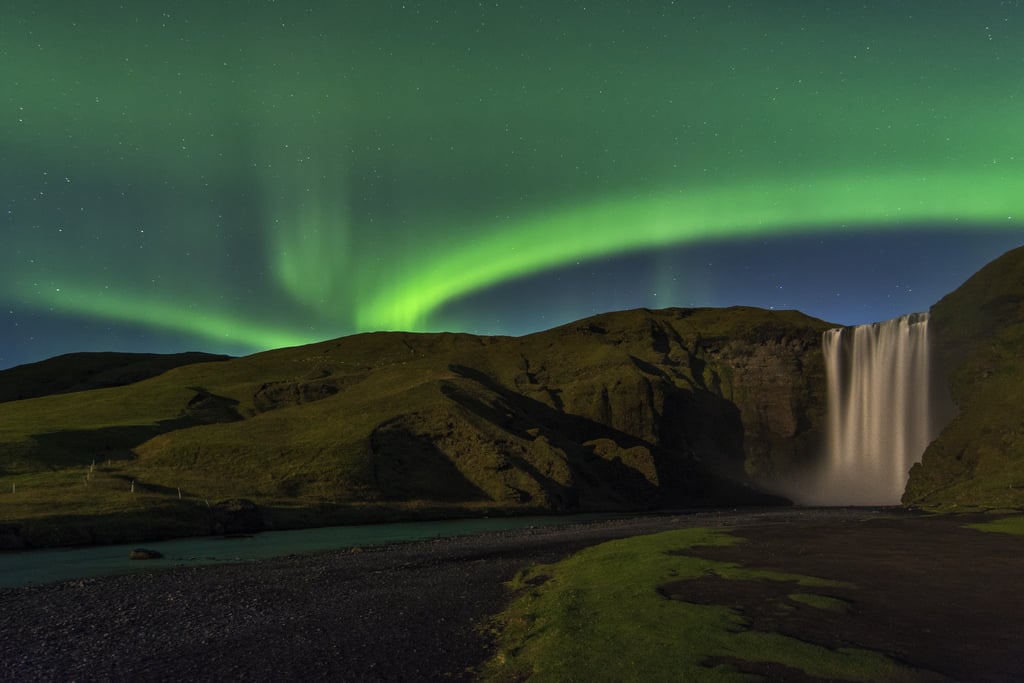 A short walk from the Ring Road and parking area bring you to a cavernous alcove. Here, the 200-foot (60 meters) tall, 80-foot (25 meters) wide behemoth resides.

Two hours of driving time separates the bustling Icelandic capital of Reykjavik from Skogafoss and its surrounding town, Skogar. Being a short jaunt with a rental car or tour bus, this is a very common stop for everything from Ring Road circumnavigations to day trips from the capital. Regardless, this should definitely be a staple of any Iceland itinerary.

Where to Stay, What to Eat

In nearby small villages and towns, there are plenty of accomodations. From Skogar to Vik, there are options abound. In fact, there are several hotels and hostels right in Skogar, including:

Additionally, the Center Fossbud restaurant is walking distance from Skogafoss. It serves cafeteria-style eats in a casual setting, and is great for a quick bite before tackling the Skogafoss stairs. Also, there are plenty of camping spots right by the waterfall for those looking to have a bit more rugged experience.

A Note About the Bathrooms

Much like other public restrooms dotting Iceland, the bathrooms at Skogafoss are not free to use. They are at the entrance to the parking lot, on the right. They are the equivalent of a public restroom found at a rest stop or at a national park.

Ensure that you have a bit of money on-hand, in the event that there is a bathroom emergency. The box to pay might be active or might not be. If inactive, using the restroom won’t cost a thing. Otherwise, be prepared to shell out a little bit of coin to relieve yourself.

In, Around and About Skogafoss

Skogafoss is located between the towns of Ásólfsskáli and Vik, on the river Skoga. Vik is a very common stopping point for many on the South Coast, and is home to some great hotels and restaurants. It is about a half hour drive west of Seljalandsfoss. This is another extremely popular waterfall in South Iceland.

For many, Skogafoss visiting is bookended in a day that starts with Seljalandsfoss, and after is followed by:

In fact, visiting the above (with a few added attractions) comprised Day 1 and Day 2 of our eight day adventure.

Skogar lies a bit south of the famous glacial volcano Eyjafjallajökull. This is the same volcano that had an intense eruption in 2010, cut air transportation for weeks throughout Europe, and brought forth the throngs of tourists to beautiful Iceland in its wake.

In Skogar, you will find the folk museum Skógasafn. This open-air museum houses turf houses and older wooden homes. There is also a regional museum that provides viewing of many ancient artifacts from in and around the area. Also here at the regional museum is a Museum of Transportation. Here, the evolution and history of communication, transportation and technology of Iceland is shown.

At the eastern edge of Skogafoss is the Fimmvörðuháls Pass, one of the most coveted hiking trails in the country. This 14-mile (22 kilometer) trail follows the Skoga river between Eyjafjallajökull and Mýrdalsjökull. It ends in the stunning and picturesque valley of Þórsmörk.

The Beauty of the Falls

The monumental vision of the falls is a constant attraction for tourists and seekers of beauty. Dropping 200 feet with thunderous sounds, water comes crashing into the basalt amphitheater. This causes a continuous spray of picturesque mist that expands throughout the cavern.

The constant mist will (more often than not) produce spectacular single and double rainbows rivaling that of Svartifoss and Hengifoss. These rainbows in the mist captivate onlookers with a persistent, majestic display of beauty.

What to Bring, What to Wear

Ensure that you pack accordingly. Areas accessible around Skogafoss, from the base of the falls to the stairs and beyond, are almost always damp and wet. For this reason, it’s important to be prepared. Here are five of our suggested must-have items:

In addition to the above, ensure you pack a lens cloth for your camera and phone. If you opt out of Frog Toggs or an alternative, ensure that your pants are somewhat water resistant. You’ll thank us later. And well-gripping footwear is vital. In the winter, the scenery is an inspiring wonderland with minimal crowds. However, the ice adds another layer of problematic footing.

Once you have taken in the power of Skogafoss from below, it is time to see if from above. This is not for the faint of heart, though. There is a massive staircase to the right of this behemoth falls. Over 500 steps separate the ground from the observation deck at the top of the waterfall.

If the climb up proves to be a bit too much, a little under halfway up the stairs is a side path. This veers off and provides an elevated view of the falls. You can also catch some sea birds nesting in the crags of the cliffside in warmer seasons.

When you reach the top of the falls, you will be well rewarded with one of the most spectacular scenes in all of Iceland.

Going Past the Observation Deck

Feeling adventurous? If so, take advantage of the climb you made, and wander up the Laugavegur trail beyond the observation deck. Just within a half mile trek from the top of Skogafoss, you will take in three more waterfalls, each with their own beauty and style:

These three falls are all worth noting, especially in contrast to the stark and desolate surrounding landscape.

Beyond these falls, within another half mile, five more smaller waterfalls beckon you to hike further along the Skogar River.  While none of these are as large as their downstream sibling, the tourist traffic is considerably less congested up river. This makes an excellent side excursion at Skogafoss.

Geography and History of Skogafoss

Speaking geologically, it was not too long ago that Skogafoss spilled the contents of the Skoga River directly into the Atlantic Ocean. However, since then the coastline has receded over three miles south.

This receding coast has created a mountainous cliff barrier where Skogafoss now stands. It is an impressive gateway and guardian between the new coastline of Iceland and the Icelandic Highlands.

Thrasi was a wealthy man, already a figure of folk tales with his magical powers and feud with his neighbor Loðmundur the Aged. As Thrasi approached the end of his life, he filled a chest with all his gold and other valuables and cast it into the pool under Skogafoss.

The legend says, “Þrasakista auðug er undir fossi Skógum, hver sem þangað fyrstur fer, finnur auðlegð nóga.” It tells that Thrasi’s chest of gold is located under Skogafoss and the first man to find it will be rich beyond their wildest dreams.

After years of this story being told, three brothers ventured behind the falls to claim the chest that had eluded so many others before them.  After being beguiled by elves and distracting visions, they finally succeeded in getting a rope through the ringed handle of the chest.

As they hoisted the treasure-laden chest from beneath the falls, victory was torn from their grasp, and the chest sunk back into the water and disappeared. The brothers were left with only a decorative ring to serve as witness to their encounter. The brothers presented the ring to their church in Skogar. Here, it was displayed on the front door for all to see.

The ring has served its purpose and has landed in the local museum where you can see it for yourself. While gazing upon it, many wonder if there is still Viking treasures hidden beneath the powerful cascades of Skogafoss.

Getting to Skogafoss from Reykjavik

Also interesting to note is that, on the way to Skogafoss from Reykjavik, you will pass by much more than just Seljalandsfoss. Some of the possible side excursions and attractions include:

The drive along the Ring Road from Reykjavik to Skogafoss is a hair under 100 miles (97 to be exact). Depending on conditions and stops, it takes roughly two hours to get to these majestic falls. Thankfully, the route is as simple as it gets: east on the Ring Road until you see it on the left. Most GPS systems recognize the waterfall as a location, making it a breeze to navigate.

Skogafoss is a stellar pinnacle for a day trip from Reykjavik (as stated above). Our recommended places to stop for a full one-day trip would be as follows:

However, if time allows and you are on a Ring Road journey, or a jaunt further down the South Coast for a few days, we highly recommend staying the night in Vik. This town is a great hub for South Coast adventures. We personally spent two nights at the Icelandair Hotel Vik and had a wonderful time.

Visit during bookend times. This means visiting early in the morning or late in the day. Want to waterfall all to yourself? You’re going to want to check it out at sunrise or sunset. We visited close to sunrise, and have several acquaintances who visited around sunset. Both times, the crowds were very minimal. When we drive back past later that day, it was packed with colorful jackets!

If you are a photographer and are on the hunt for some great Skogafoss shots, early and late are best as well. In fact, if you want some stellar astrophotography with a massive waterfall as a backdrop, Skogafoss is open year round, all day and night! Depending on the time of day and year, you can even experience the Northern Lights as they dance in the sky above the falls.

Whatever your reasons for visiting Skogafoss are, the falls will not disappoint.  Convenient, iconic, beautiful and inspiring, Skogafoss holds everything you are looking for.  Come see the awe-inspiring falls that will take your breath away, the majesty of Skogafoss waits for you.