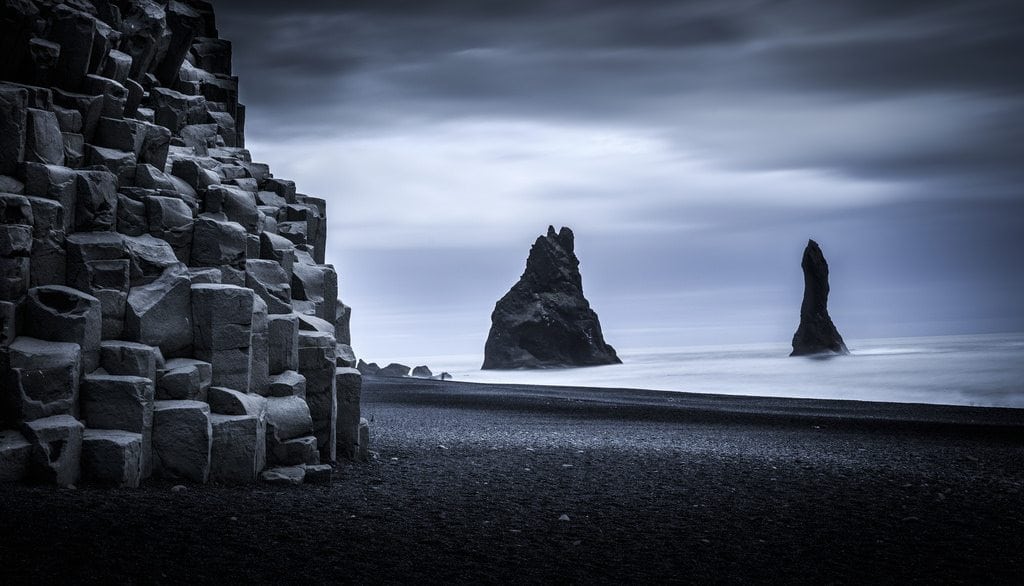 Beautiful Iceland. The raw natural splendor of this country is guaranteed to take your breath away. Majestic waterfalls, tumultuous volcanoes, craggy rocks, intimidating glaciers, lava tubes, kind people, delicious food and more. How can so much natural diversity be contained on such a small island?

The unpronounceable locations may make you chuckle, but after visiting some of these sights, you’ll approach Iceland with a new sense of vigor. The incredible landscapes and otherworldly sights will make you fall in love. The changes of landscape in Iceland are unreal. The warm and welcoming populace of the country make it even more of an experience. Today we are going to dive into Reynisdrangar, one of the many natural wonders of Iceland. This trip of basalt sea stacks can be seem from miles away in Dyrholaey. They jut out of the rough crashing waves of the Atlantic Ocean right off the coast of Vik, home of the famous black sand beaches, Solheimasandur Plane Crash, the aforementioned Dyrholaey and more.

Reynisdrangar is situated under the mountain Reynisfjall near Vik (also known as Vík í Mýrdal). Vik is the southernmost village in Iceland, and home to around 300 inhabitants. Following the black sand beaches will take you right here. This location is about 180 kilometers from Reykjavik, and is located off a short side road from the Ring Road in southern Iceland. GPS coordinates for the exact location is 63.402778 N -19.028333 W.

Nearby is the Black Beach Restaurant (author note: we tried a ton of Skyr cake in Iceland, and this place had the best out of all of them). There is also an incredible cave and large basalt stacks that can be climbed. In 1991, National Geographic ranked this beach as one of the ten most beautiful non-tropical beaches in the world.

A Tale of Two Tales

The Reynisdrangar Rocks stand strong and tall, jutting out of the Atlantic Ocean like triple towers of stone. At their full height, they are 66 meters tall. They stick out of the sea as if they were weapons left by Odin. Older Icelandic folklore says that the basalt stacks originated when two trolls dragged a three-masted ship to land unsuccessfully. When daylight broke, the masts on the ship became needles of rock. We are, of course, paraphrasing.

More contemporary legends note the story of a husband who found his wife taken by the two trolls, frozen at night. The husband made the two trolls swear to never kill anyone ever again. His wife was the love of his life, whose free spirit he was unable to provide a home for; she found her fate out among the trolls, rocks, and sea at Reynisfjara.

It is vital to remember that, if visiting the area where Reynisdrangar is, to keep an eye on rogue waves. Whether looking at the rocks from the east at the beaches in Vik, or the west, close by, from Reynisfjara (the black sand beach), these warnings need to be heeded. The waves especially at Reynisfjara are unpredictable and extremely powerful. Several people have been dragged out to sea by powerful waves and even more powerful rip currents, never to be seen again. (author’s note: we went on a calm sea day, and still people were getting too close to the water and getting destroyed by waves… many wet pants were made that day).

One of the best rules of thumb here is to not ever turn your back to the ocean near Reynisdrangar, or anywhere on the Southern coast of Iceland near Vik for that matter. Although it might seem calm, waves hit hard and hit fast.