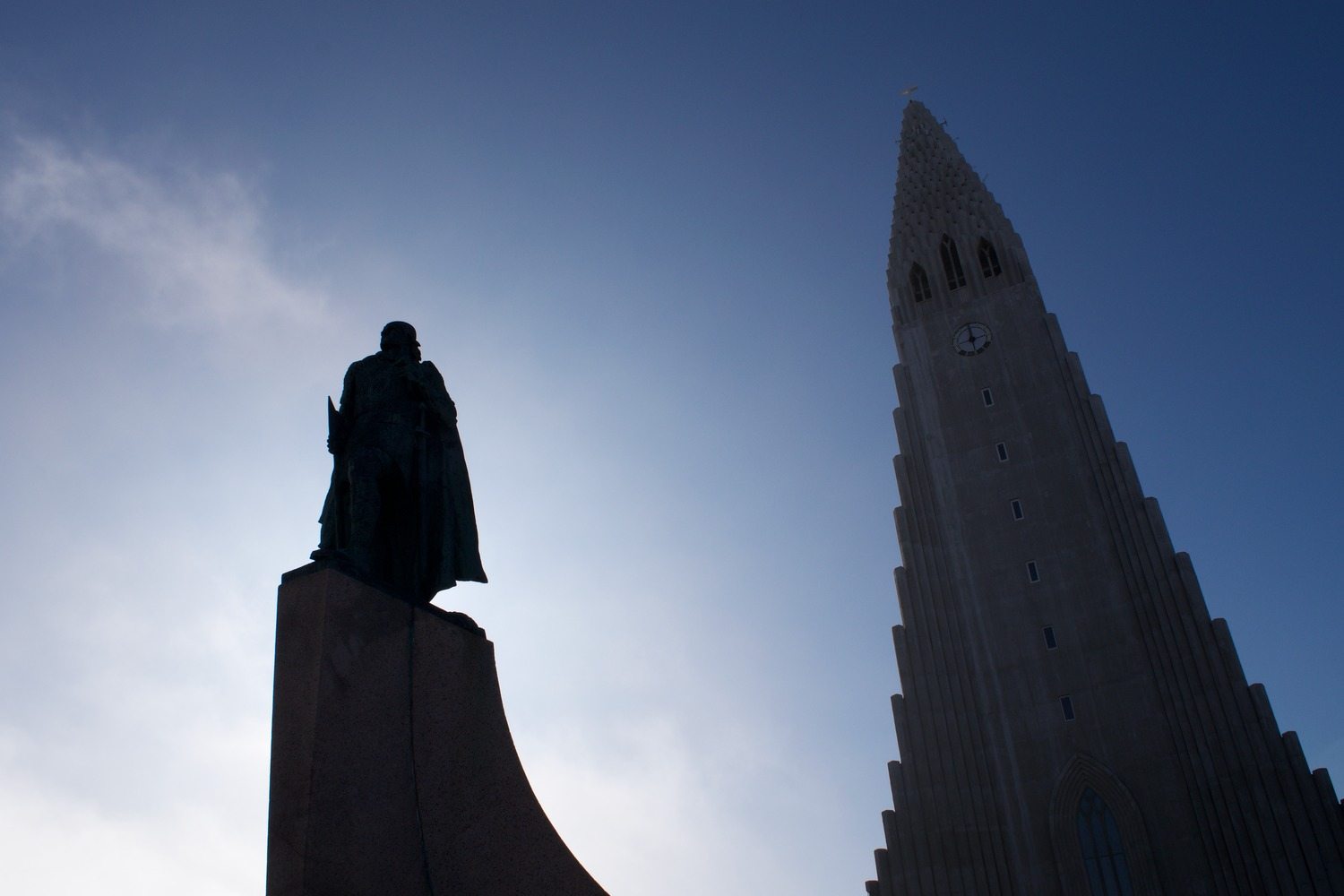 This was it. The final full day of our Iceland adventure. Bittersweet, but incredible to look back and know that this past week had been the most eventful and exhilarating of our lives thus far. Our plans were to spend the morning exploring Reykjavik, then hit the Blue Lagoon to relax a bit, and then back into Reykjavik for some final wandering before an early night’s sleep. The sleep was restful, even with a second floor room by the elevator with the window cracked open all night. Breakfast was delicious and plentiful at Storm Hotel, even without any hot options. They had plenty of meats, cheeses, eggs, and pastries, as well as other bakery items and a plethora of sauces and toppings, so we were satisfied. We ate and headed out to explore. As we walked we noticed incredible amounts of street art, of which our journeys are cataloged on the Reykjavik Street Art page. An overwhelming percentage of buildings in downtown had amazingly detailed artwork on their sides. The quality and abundance of street art was even greater than that of even San Francisco, Seattle. We walked all through Reykjavik and eventually returned to Hallgrímskirkja and the statue of Leif Erickson (which was a gift in 1930 from the United States to Iceland to commemorate the 1000 year anniversary of Alþingi, the parliament of Iceland). This church is the tallest building and largest church in Iceland, and can be seen from most points in downtown Reykjavik. The interior of the church was an incredible work of architecture, and the smooth arching lines of the cathedral were a strong contrast to the sharp, jagged lines of the exterior (in a fashion similar to Svartifoss, from which inspiration for Hallgrimskirkja was drawn). We didn’t stay long inside the cathedral, as there was no air conditioning and the inside was incredibly hot and humid. I paid the 900 ISK at the gift shop to take the elevator to the top of the church observation deck. I ended up on the other side of the clock you see near the top of the peak, and took a staircase up to a crude observational area. There were small windows leading out in all four directions. The above image was slightly disappointing, and as were the following two due to the fog that had rolled in that morning. I was getting anxious for what the view would be for the classic lookout point towards the center of downtown Reykjavik. Much better! Still foggy with some cloud cover, but it was clear to see the color and character present in downtown Reykjavik. The city is beautiful, and home to almost 70% of all Icelanders. I snapped some more pictures and headed back down to the ground. We got hungry, so we stopped by Café Babalú for an unhealthy snack. Inside, there was a jumble of dilapidated tables, chairs, and booths, and not much room to move around. While we were two of the only people present, it felt like we were in the middle of a crowded cafe from all the things on the walls and ceiling. We ordered Nutella cheesecake, a chai latte, and grabbed a cookie. The food was quite delicious. But do you see an issue here? That’s right, I was given a chai latte, an extremely hot one, in a glass. I had no way to pick it up or hold it. The glass was incredibly hot, and even though we asked for a mug instead, we were told “no, chai goes in glass”. So if you go to Café Babalú make sure you don’t order the chai latte without oven mitts! After this, we walked north, eventually hitting Snorrabraut and then Saebraut, where we intended to follow down to Solfar (Sun Voyager) Sculpture. On the way we walked past this incredibly-decorated building. It reminded us of the mural in front of the Woman’s Building in San Francisco, California. It was here that we met a beautiful dog named Molly and got to play with her for several minutes. We made it to the Sun Voyager Sculpture just as a ton of fog rolled in above Kollafjörður. The view was incredibly ominous. Eventually the tourist in the image above left, and we got the whole massive sculpture to ourselves for a couple minutes. It was beautiful modern art, and interestingly enough does not represent a Viking ship. As we left, a large group showed up and started doing some kind of strange ritual. We stood and watched for a minute before heading down the street to the stunning steel-and-glass Harpa Concert Hall. This building is something that needs to be seen to be believed. It can be seen from the Old Harbour, and made an appearance in Day 7 in the pictures from there. As stated from the building’s Wikipedia page: Construction started in 2007 but was halted with the start of the 2008 Icelandic financial crisis. The completion of the structure was uncertain until the government decided in 2008 to fully fund the rest of the construction costs for the half-built concert hall. For several years it was the only construction project in existence in Iceland. The inside was just as beautiful as the outside, with glass and concrete painted black, as well as raw concrete in several areas. This was the first time since going to the EMP Museum in Seattle that I had been in a building that was in itself “artistic”. We explored for quite a while, as the entire building was open for roaming. We walked over to Baejarins Beztu Pylsur once more before heading back to the hotel, changing, and driving the 40 minutes to the Blue Lagoon. We had booked the Premium tickets (10,200 ISK each), which includes a mud mask, an algae mask, a free drink, a towel, bathrobe, and slippers. The entrance area is a long walkway with natural lava rock walls on either side, reminiscent of Thingvellir National Park’s walk to Oxararfoss. Quite a few people were walking back and forth with their luggage, as Blue Lagoon is a popular destination once short-term travelers land at Keflavik International Airport. Once inside we are greeted with a super-overpriced gift shop and a modern-looking check in area akin to a hotel. Once checked in, we received a waterproof digital armband that allowed us to lock and unlock lockers, as well as purchase amenities and drinks once in the water. We undressed and showered and changed and then met up in the extremely crowded deck area. While far larger than the Myvatn Nature Baths, Blue Lagoon is also far more crowded, with a less sought-after landscape and a non-natural pool made blue with silica instead of sulfur (so the sulfur smell was not as powerful). We hung out and enjoyed the scenery for a few minutes before entering the water. We then were approached by a staff member in the water who gave us the mud mask, which we applied and waded about. We headed to the bar and got our free drinks and then walked the perimeter of the lagoon, washed off the mud mask and got the algae mask, then went under the bridge and explored some more.

I’m sure some of it was due to the exhaustion from the long trip, or depression knowing we had to fly out early the following morning and leave this beautiful country, but we only lasted about and hour and fifteen minutes at the Blue Lagoon before we decided to head back to the locker rooms, change, and escape back to Reykjavik to explore a little bit more before our vacation came to a close.