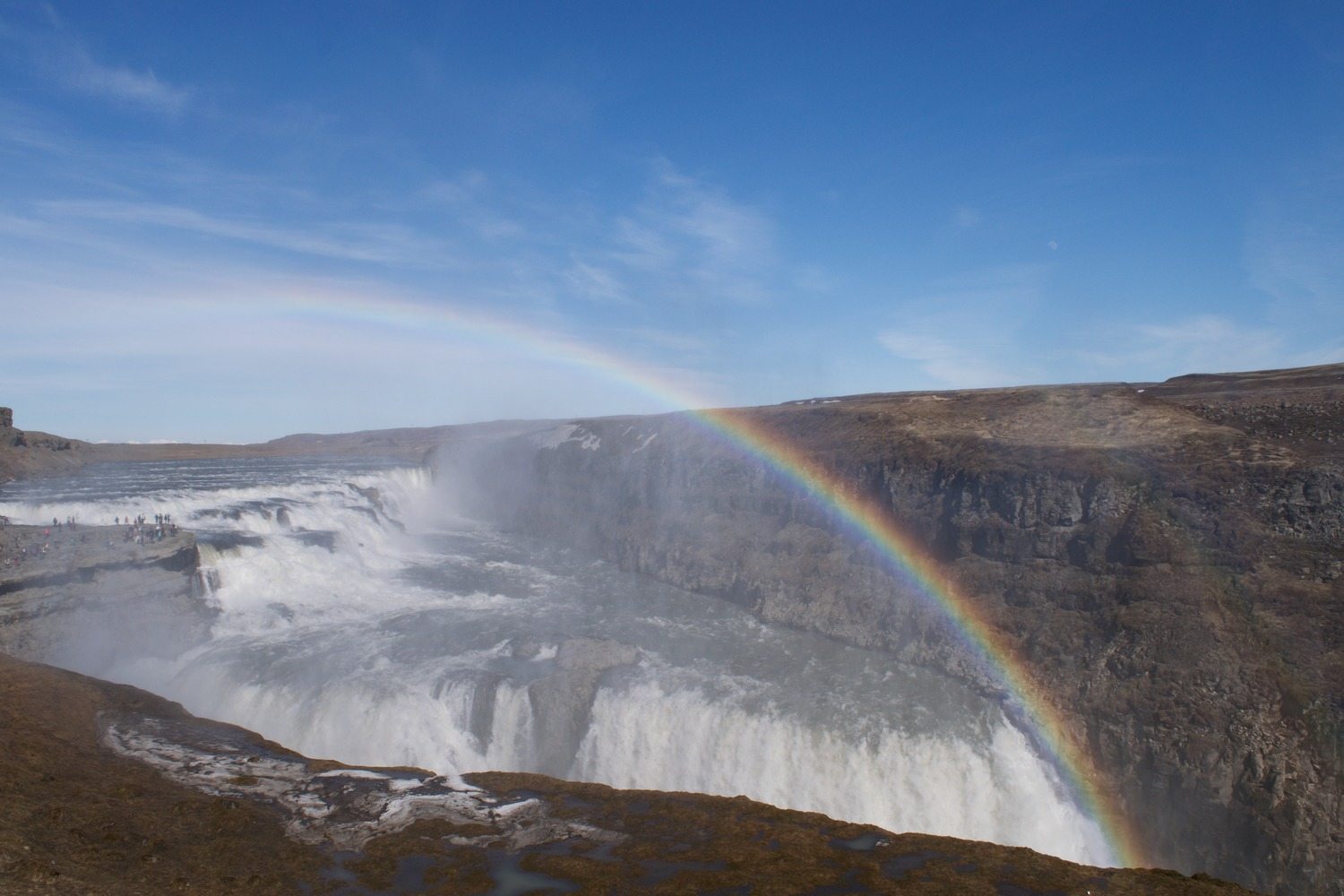 DAY 7: REYKJAVIK AND THE GOLDEN CIRCLE

This was going to be a long day. We wanted to squeeze in the breakfast buffet at Fosshotel Hellnar before making a very fast, nonstop 200km drive to the Reykjavik Old Harbour in time for an 11:00am Puffin Express Tour with Special Tours in Reykjavik. In addition, we planned to spend the afternoon navigating the entirety of the Golden Circle (including the Crater Lake), and then exploring downtown Reykjavik in the evening.

Well aware that mots people spend an entire day on just the Golden Circle, we were also aware that most of the attractions there would be overrun by tourists, and that over the course of the past week we had become very efficient at getting the most out of these attractions without overstaying our welcome. We were hoping this luck continued. We started strong, and luckily the breakfast buffet at the Fosshotel Hellnar has opened 15 minutes early. We scarfed down a relatively goos spread of food and hit the road at 7:45am. By 10:15am, we were pulling into the beautiful Old Harbour, silhouetted by the Harpa Concert Hall (which would be explored further the following day). We checked into the Puffin Express Tour at the Harbour and then proceeded to park a couple streets down in a graveled public parking lot. The side street we walked back down to get to the harbor was immaculately clean with various art displays and shops along it. As this was a back street facing the working area of the harbor (including a massive shipping vessel raised out of the water), we were already impressed with the number of things to see and do in Reykjavik. Our ship for the tour was a shallow-bottomed boat with space for ~15 people. The tour guide was a young girl from Rome who had just moved to Iceland recently. The tour was 20 minutes out, 20 minutes around an island that was supposed to be covered with thousands of puffins, and 20 minutes back to the dock. We started a little bit late, as one straggling tour-goer didn’t make it to the boat on time. But not too late. We were off on our voyage by 11:10am. She was not joking about the puffins! They were everywhere the closer we got to the small island. Having not seen a puffin before, we were expecting them to be penguin-sized. As it turns out, they are far smaller, and incredible divers and swimmers. They also had a strange, very low call compared to birds of similar size. The guide answered all our questions and did an incredible job on the tour. Binoculars were provided as well to all. When we got back to shore and off the boat, we immediately started looking for a place to have some lunch. We ended up back on the same street between the harbor and parking lot, at a place called Slippbarinn, which was located in the bottom floor of the Icelandair Hotel Reykjavik Marina. The place was hip and colorful, with a large variety of incredibly expensive drink combinations. We both ordered the fish and chips, which we had eaten previously at Center Fossbud in Skogar. These were on a whole different level. Definitely the best plated meal we had in Iceland, the fish was light and crispy, the fries were an interesting hard variety, and the side sauce was tangy and pleasant. The grilled lemon half was a nice added touch as well. Full and impressed with the food and the price (especially compared to the drinks), we set off on the Golden Circle. The parking lot for Þingvellir National Park was slammed, so we passed by and parked at a smaller lot a mile or so further. After a little bit of walking, this is the view we were greeted with. We were curious what was at the end of the canyon pathway, so we descended the stairway and began walking. As we walked along the wooden path, it started getting extremely hot. A few tourists were climbing all over the rocks to the left, and we heard a security guard or park ranger screaming at them in Icelandic to get down. We continued on, and the spray began getting closer. As we kept going, we realized that this was a waterfall. And here we were thinking that Gulfoss was the last waterfall we would be seeing in Iceland! As it turned out, we had stumbled across Öxarárfoss. As stated on the waterfall’s Wikipedia page: “It flows from the river Öxará over the Almannagjá. The pool at the base of the waterfall is filled with rocks and is often extremely icy during winter.” This waterfall was small in comparison to others we had witnessed on our trip, but was definitely extremely intense, as we were right in front of the falls. When we were done at Thingvellir, we traveled the 45 minutes to get to Strokkur/Geysir on the Golden Circle. This location was busier than any other destination we had experienced on our trip. There is a rather large restaurant and gift shop on the right side of the road, directly across from the geysers. A large parking lot here is the location to park and walk over to the attraction.

Please note that all water in this area is hot, and should not be messed around with. When you see areas of the ground that look chalky white, definitely do not touch it. Don’t touch the rocks, either. We watched someone get burned as a result. Be warned, the majority of your time at Strokkur (Geysir is currently dormant) would be spent staring at a hole in the ground. The geyser erupts at random intervals and very unpredictable times. It took us eight minutes of standing around to get an eruption, and it happened so quickly that it took another seven minutes to get to the next one and capture the above image. If you are on a serious time crunch, I highly suggest skipping this attraction.

After the disappointment of the geysers we took a short ten minute drive to the parking area for Gulfoss. We started to feel the same way about Gulfoss, as the parking area was packed with tourists and colorful jackets dotted the path to the waterfall. We started down to the falls and quickly saw a beautiful piece of a rainbow and some mist. I honestly thought the waterfall was smaller, so I was anticipating a smaller fall. We were pleasantly surprised to find this massive, incredible two-part waterfall. The rainbow silhouetting the falls was absolutely gorgeous. As this was our last waterfall of our journey out of well over a dozen, it was a sad but monumental close to our waterfall-chasing adventure. This is the viewpoint from the upper viewing area. We got to this point on the lower overlook before we had to stop. It’s not very visible in the image, but the mist from Gulfoss was getting extremely heavy, and we had no solid waterproofing for our DSLR. So I snapped the above image and we turned back. We went back to the upper overlook one last time, though, for a final waterfall viewing. It was here that I started to realize that this adventure ended after the following day. We had initially planned to skip the Kerið Crater Lake on our final draft itinerary. After we discovered that the Viti Crater had frozen over, we decided to add it to our itinerary for our Golden Circle tour. Checking Google Maps, it added virtually no additional time compared to backtracking fro Gulfoss, so we drove the 45 minutes to the lake and paid the fee (400ISK each), then walked up a red hill and found the above. Incredible! The photos don’t do the size of this crater justice, but note the people on the ledge in the distance as a size comparison. We returned to Reykjavik and checked into our hotel for the evening (Storm Hotel). Be warned, parking currently for the hotel is a nightmare. There are maybe a dozen spots behind the hotel for over 100 rooms. We were lucky enough to catch the manager parking space and run to the front desk, who confirmed we could park there for the weekend. After checking in (the room was quite nice and spacious, and the bathroom was extremely luxurious), we walked over to Baejarins Beztu Pylsur to check out the most popular hot dog stand in the world. The line was long and the group in front of us were Icelanders talking in their native language. It was interesting to listen in. I got two of the regular hot dogs with whatever sauce they put on them. They were delicious! Although Baejarins Beztu Pylsur was in the middle of a construction zone at our time of arrival, it was still packed with people, and the line grew even longer as we ate at one of the nearby tables with hot dog holder. Interested in ingesting one last slice of Skyr cake after those hot dogs, we walked down the main walking street in downtown Reykjavik (Laugavegur) and then cut across Frakkastígur towards Hallgrimskirkja. Across the street from the breathtaking church (which derived inspiration for its construction from the basalt columns of Svartifoss) we found Cafe Loki, a quaint second-floor cafe that served traditional Icelandic meals. There we got Skyr cake, which was incredible, better than Kaffi Ilmur in Akureyri but still not as good as the Skyr cake at the Black Beach Restaurant. We also indulged in a chocolate chip Skyr-stuffed pancake, which came topped with caramel sauce. It was amazing. To me, it blew any other dessert we had eaten at that point in our trip out of the water.

After eating, we paid and walked back to the hotel for the evening, saddened that tomorrow would be our final day in Iceland, but excited for further exploration of downtown, as well as a journey to the Blue Lagoon.