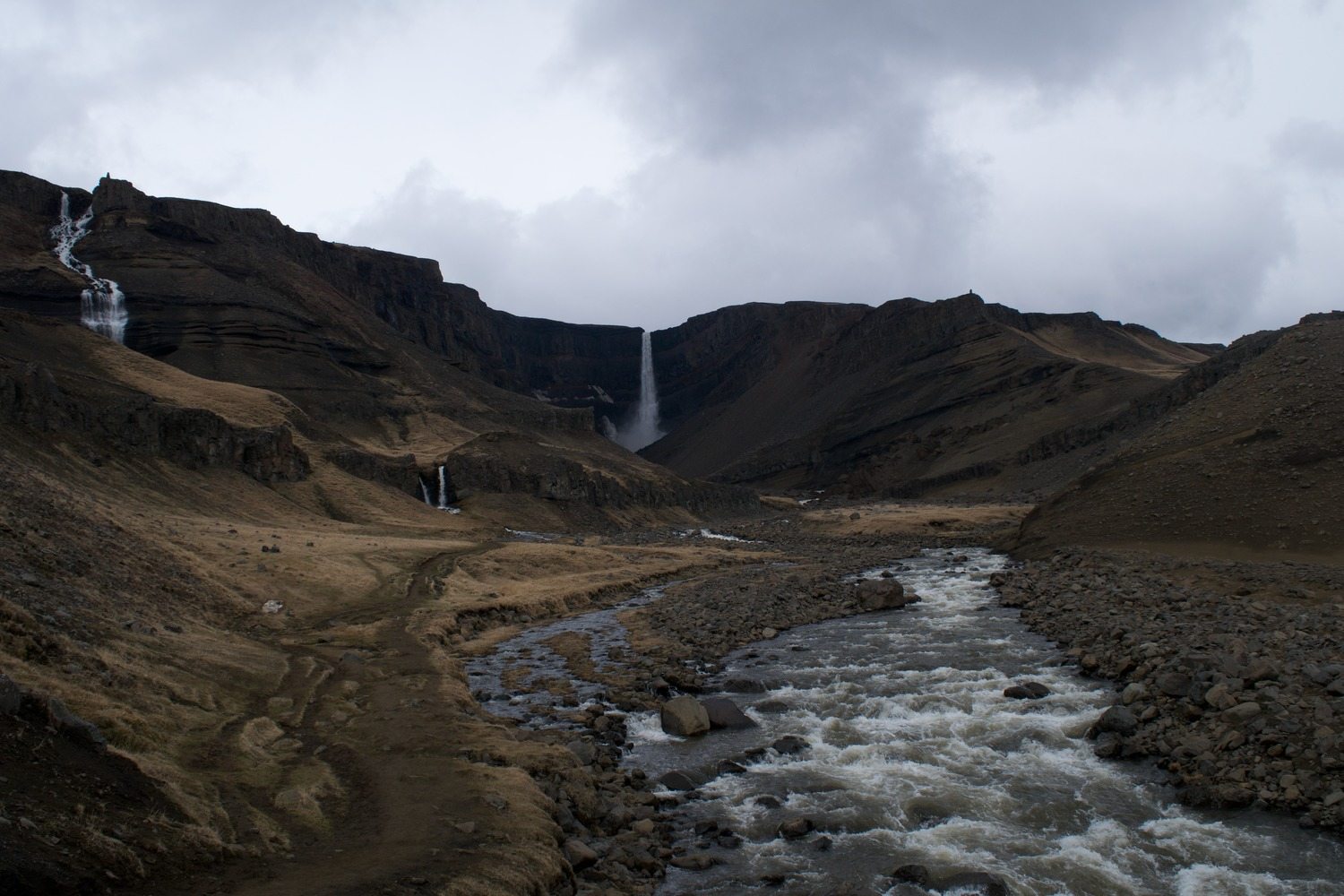 Have you ever thought about taking a trip to Iceland? There are many amazing countries in the world, but Iceland will hold a spot in the heart of many tourists. This is not a coincidence. The Eastfjords (Eastern Region of Iceland) has become popular for many reasons. As of 2007, the Eastern Region was home to roughly 15,000 people. It covers an area of more than 22,000 square kilometers. Within this guide, you will learn about the Eastfjords and its beautiful attractions.

Mother Natural can be amazing, and sometimes downright mesmerizing. She has blessed the world with with many stunning waterfalls. Here are some of the most well-known waterfalls in East Iceland. If you are near Egilsstaðir, you will definitely want to take a side road to visit Hengifoss. This natural attraction is the third tallest falls in Iceland. It is 118 meters high (almost 400 feet). Of course, it is the red striations of the canyon side that makes the waterfall so stunning. Those red strips set this waterfall apart from others worldwide. The Gufufoss waterfall is a force to behold. The falls dump the water with extreme velocity, in a shape identical to Skogafoss. Gufufoss is so powerful that it is difficult to get close to. The water vapor expelled covers a great distance. If you’re going to visit this waterfall, prepare to either get wet, or stand a good distance away. The mist and lush vegetation make this one of the most appealing waterfalls in Iceland. While Sveinsstekksfoss might be compact and modest, it is still stunning. This waterfall is along the river Fossá. It lies a little northeast of Djúpivogur. The falls only cover a height of 49 feet, but it is not a straight descent down like most Icelandic falls. Instead, the water follows a zig-zag pattern down the rocks. Additionally, the view surrounding Sveinsstekksfoss is amazing. This waterfall will definitely remain in your memories long after returning home. From a distance, Gilsárfoss is not one of the most impressive. In fact, it is a basic waterfall, and the water isn’t very powerful. Regardless, Gilsárfoss has still managed to become one of the most popular in East Iceland. If you travel east of the town of Fáskrúðsfjörður, you will get to several waterfalls. They’re hidden away in a private location for your viewing pleasure. The Gilsárfoss is definitely the most notable. It is unique, because you can actually walk behind the stream of water. Since it is so close to town, you’ll definitely want to check it out! There are many amazing waterfalls in Iceland. Some are more notable than others. Klifbrekkufossar is one of the tallest, but is not very popular among locals or tourists. This is because it is well off the beaten path. If you aren’t willing to hike a long distance, you’ll never cross this off the bucket list. Klifbrekkufossar is impressive in its own way. It features several drops, more than most Icelandic falls. Unfortunately, the stepping can distort views, making it difficult to get clear pictures.

Regardless, the scene still looks like something out of a beautiful oil painting. If you’re willing to hike a bit, this waterfall is well worth checking out. The Yst Í Rjúkandi waterfall is in Eastern Iceland, right off the Ring Road. While it is one of the least trafficked falls in the area, it is still an impressive sight to behold. In fact, it is massive in size compared to others. The water’s force is staggering as well. The water divides and descends downward in two pieces. That makes for an incredible sight. Despite having little to no hype, this attraction is still well worth your time.

Other Sights In Eastfjords

There are many amazing sights spread throughout the Eastfjords of Iceland. Below are some of the most notable.

There isn’t a whole lot to do in Eggin í Gleðivík, but the scene itself is unique for one reason. There are tons of sculpted eggs. This attraction is in Djupivogur. These egg-shaped sculptures were actually sculpted from large rocks. It is clear that a significant amount of time went into the work, because they’re very smooth. When traveling to this location, you’ll definitely want to snap a picture or two with one of these big eggs! If you’re looking for an attraction that will stick with you, you’ll definitely want to travel to Lönd. Once you do, head to the sea. Here, you will find the “sea geyser” Saxa. The Saxa Sea Geyser is a natural phenomenon and is one of the most amazing attractions in Iceland. If you’re lucky, you’ll be able to watch the geyser spew water into the air. The massive waves of the Atlantic Ocean will crash into the land, causing huge splashes. The water hits at such a force that it causes seaweed to shoot into the air.

Many tourists love deep, dark places. Caves would most definitely fit into this category. Fans of caves will definitely want to venture over to the Neskaupstaður Nature Reserve. This is where you’ll discover the Páskahellir Cave. It might be small in depth, but it is massive height-wise. After you’ve entered the Reserve, you have to walk ten to fifteen minutes before you arrive. Still, the cave is well worth it! Plus, you’ll be able to walk right into the cave. Be careful, though, because the wooden stairs can be slippery! The road to Dalatangi might be a rough and narrow trail. Once you arrive, you will see that the trip was worth it. When you make it to the end of the road, you will see this amazing lighthouse surrounded by a beautiful farm. Dalatangi is right on the edge of a rugged and high shore with a roaring ocean located below. This is one breathtaking structure that any sightseer will not want to miss. While this is a newer structure, it still makes an impression that will last a lifetime. Before leaving the Eastfjords, you owe it to yourself to visit Mt. Dyrfjöll. This point is one of the northernmost boundaries of the Eastfjords. Its name translates to Gate Mountains. It doesn’t matter which direction you approach from. The mountain is massive and very prominent. You’ll be able to see it from a good distance away in every direction. The areas positioned to the south and east of the mountain tend to very popular among hikers. Even if you’re not a hiker, you can still enjoy your trip to this mountain.

Be sure to bring your camera, as you’ll want to return home with a few photographs of the stunning structure. This gorge is in Njardvik. The good news is that you will not have to worry about walking very far. This sight is accessible from the nearby road. On top of that, parking is available. Walk 100 meters to the north to witness the sight in front of you. If you’re a fan of natural attractions and want to see what erosion can do, you need to visit the gorge. The gorge is a miniature waterfall of sorts. Sit nearby and close your eyes. Listening to the Innra-Hvannagil Gorge will take your breath away!

Egilsstaðir is a small town in Iceland with a population of around 2,500 people. Located on the Lagarfljót River, this town features both robust fishing and Hengifoss. The waters cascade 400 feet over the steep incline to the waters below. The falls is a spectacle that draws people throughout Iceland and all around the world.

While small, the town houses thousands of people each year. The locals are friendly and welcoming to visitors, making it an enjoyable place to visit.

Fáskrúðsfjörður is a tiny village located in eastern Iceland, with a population of around 700. In the center of the village sits a restored hotel. This hotel was a prominent hospital that served French fisherman. Now, it serves hundreds of visitors who are attempting to get a glimpse of the Northern Lights.

Reyðarfjörður is small town, larger than Fáskrúðsfjörður and smaller than Egilsstaðir, with a population of 1,100 or so. It is one of the most populated towns in Fjarðabyggð, a municipality in the Eastern Region of Iceland. The mountains surrounding the town made it an ideal location for Allied bases in WWII.

Reyðarfjörður’s climate is not the most favorable for outsiders. Regardless, hundreds travel there during the summer to visit its World War II museum. In 2014, the town hosted the filming of the Sky Atlantic series “Fortitude.”

Eskifjörður is a small fishing port in eastern Iceland. The town is home to more than 1,000 people that work in the fishing, tourism and hospitality industries. Hundreds flock here to tour the Maritime Museum and sculpture by Ragnar Kjartansson. The sculpture commemorates the sailors and seaman who lost their lives at sea.

The town houses the most luxurious stone collections in the country. Thousands of original, cut and polished stones are throughout the island.

Seyðisfjörður is a quaint, tiny village in eastern Iceland, with a population of around 700. The Norwegian fishermen constructed the historic wood buildings in the town. These buildings, along with the remnants of urban streets, draw hundreds each year. The town and locals are hospitable and accommodating to these visitors. They provide them with pools, cinemas, camping grounds with amenities, and shopping areas.

The village also has a heritage museum that displays hundreds of artifacts from the past. Every July, the locals host an Art Festival, which draws visitors nationwide.