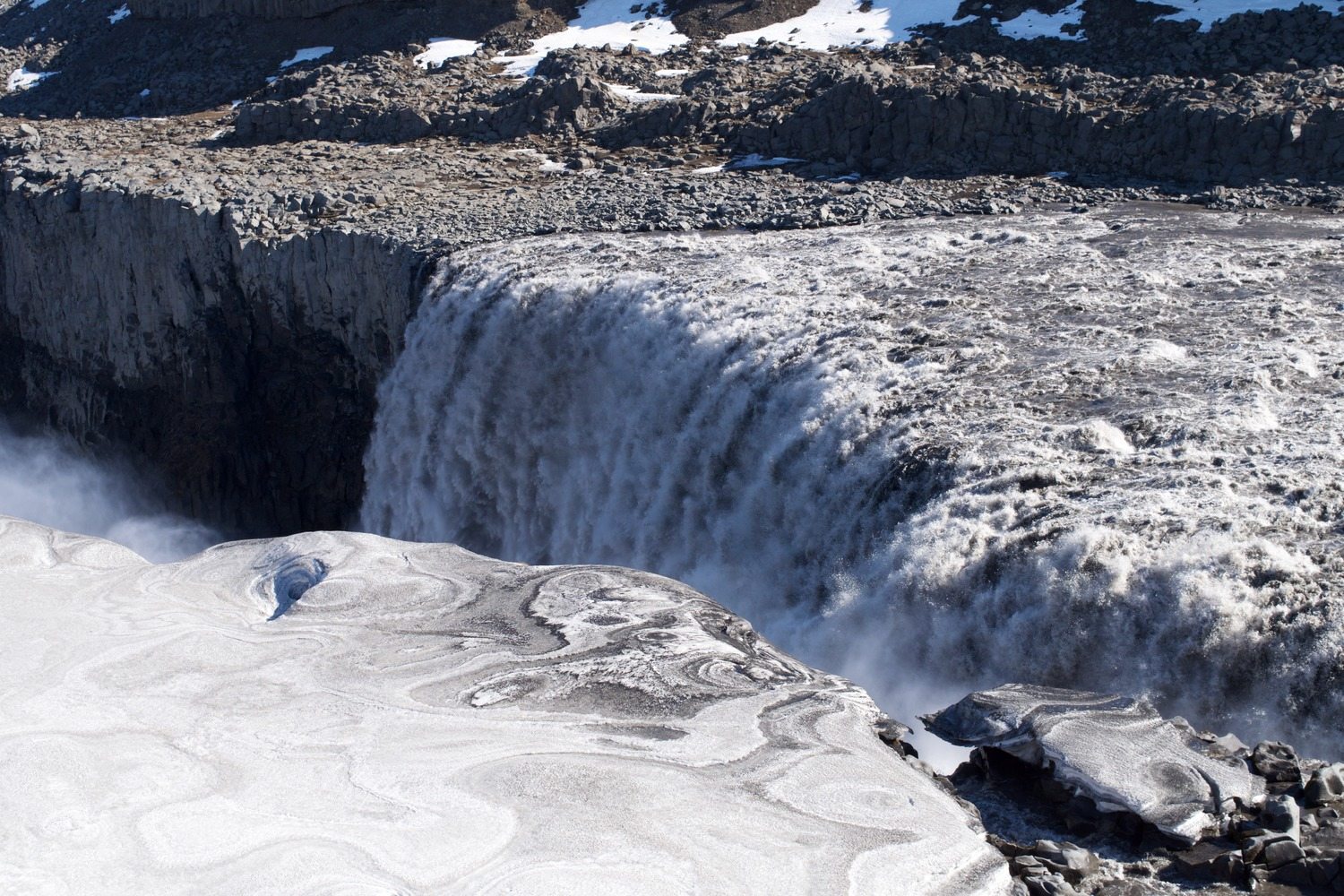 After a restful night sleep, we packed up and drove across the street to the breakfast buffet in the guesthouse check-in area. We arrived early enough to see the cows being milked, which was pretty cool. The breakfast buffet was relatively all-inclusive, although there was no hot food available. Plenty of meats, cheeses, and breads/fruits/vegetables though! We hit the road relatively early, aware that if we wanted to get everything done we wanted to do on our itinerary, we would have to book it. Our first stop was a few minutes from the guesthouse: Grjotagja. Well known from Game of Thrones, Grjotagja is a geothermal cave in the Myvatn area. When we pulled in, the view was not too stunning. We weren’t expecting much as a result, and had not watched Game of Thrones, so weren’t sure what to expect inside the cave. What we were greeted with upon lowering ourselves down a few steps was incredibly impressive. The water was about the same warmth as the hotter side of the Nature Baths, but the beautiful sunlight and blue sky reflected in the crack of this lava fissure. It was definitely far more than anticipated. We took a few pictures and backed out, as another couple had parked and were setting up a tripod. Our next stop was clustered closely to Grjotagja. The Bjarnarflag Geothermal Power Plant is both the smallest and oldest geothermal plant in Iceland, and its runoff pool was the most beautiful blue we had seen thus far on our voyage. As stated on the Wikipedia page for the plant: “The Bjarnarflag power plant is used to supply hot water and heating for the local district, particularly the village of Mývatn, and geothermal brine to the Mývatn nature baths.” Continuing our journey through the sights of the Myvatn area, we backtracked over the mountain to the Boiling Mud Pots area near Mount Námafjall. The sulfur smell intensified and the air heated up in this area, where superheated mud piles actually turned blue and purple from the steam and boiling water inside. It was strange thinking of the changes in scenery already from Keflavik (snow) to Vik (black and white) to Systrafoss (trees) to Glacier Lagoon (ice) and now the Mars-like surface of the Myvatn area. Our next stop was the Viti Crater. Continuing backwards on the Ring Road from the Boiling Mid Pots area, there is a white stick-like sign reading “KRAFLA” on the left side of the road. Turn down that road and continue. After a few miles you will begin to pass through the Krafla Power Station, a large geothermal power plant. The opposite of Bjarnarflag, this power station is the largest of its kind in Iceland, feeding from the Krafla Volcano. To get to the Viti Crater, you have to pass directly under these pipes. This is an awesome photo opportunity. As you can see from the above photo, this morning we were experiencing zero cloud cover, however some of the ground was still ice covered and frozen. This will come into play shortly, because: The Viti Crater was still completely frozen over, even in early May with direct sunlight! After seeing photos of the incredible shimmering blue water, we were extremely disappointed. However, the view was still beautiful, and the drive was scenic. At this point, we were getting exited for our next stop, a place we had to skip by the previous day as our time schedule did not allow us to go before the Nature Baths closed: the mighty Dettifoss. After stopping at an overlook and utilizing our 4G card to research the best way to get to Dettifoss, we settled on Road 862 instead of the far-rougher (but better viewpoint) Road 864. In the end, we were glad we made this decision, as Road 864 had been closed due to traveling hazards and icy conditions. It was a long drive to Dettifoss from the Ring Road, and when we arrived at the spacious parking area, there were very few others there. The above image is what the flooded parking area looked like, the result of melted snow over the previous few weeks. On our way back to the parking area, this was what we encountered. Everyone on this picture was over 65 years old. It became very difficult to maneuver the trail, and at several points we had to go off the trail to allow far slower people to try and navigate through the ice in groups of 10-15 at a time. When we got back to the car, there were seven large tour buses parked at the lot, and on the way back to the Ring Road we passed another five. Needless to say, morning is the best time to go to Dettifoss in order to avoid crowds. On the way to Godafoss, we passed back through Myvatn, and then past the partially frozen Másvatn Lake, which is apparently very plentiful for fishing enthusiasts. It made for some nice photography for sure! Godafoss was absolutely beautiful, and made for some incredible photography. It also had a very rich history. Sadly, our experience with the waterfall was that it had become a solid tourist destination. A massive gift shop and gas station sat very close by, and both sides of the falls were paved with trails. People were gathered all over. To be fair, we were also tourists in the jumble, and this should have been expected in early afternoon. We were still able to get some nice shots and memories, though! On our way further down the Ring Road in northern Iceland, we experienced more beautiful blue with snowy mountain backdrops at Lake Ljósavatn. Route 1 curves around this lake for quite some time and allows for some incredible pictures, with several pull-off stops to enjoy the scenery. At the south end of the lake, we began to see a large civilization. As we continued, the beautiful city of Akureyri began to unfold. Situated on the banks of Lake Ljósavatn and about an hour’s drive from Godafoss, Akureyri is the second largest urban area in Iceland with a population hovering around 18,000 inhabitants (that’s 6% of Iceland’s total population). This picturesque town was one of the most beautiful urban places we had ever seen. Colorful buildings lined clean streets. Hustle and bustle of quiet residents and visitors gave this small place a big-city vibe. Parking was a bit of a nightmare scenario, as the largest lots in the city were set for one to two hour parking. I found a two hour spot after some circling and jogged over to a taxi office, where I received a free cardboard clock on which to mark the time of arrival. Then we ventured out and had a wonderful lunch (and coffee-infused Skyr cake) at Kaffi Ilmur, a quaint little two-story yellow cottage located on a hill right in downtown Akureyri. After eating, we walked down one of the main streets, following the sun towards the stair-laden hill upon which Akureyrarkirkja sat. While we were unable to enter, as stated in the Wikipedia page for the church: “Akureyrarkirkja contains a notably large 3200-pipe organ, a unique interpretation of the crucifixion and a suspended ship hanging from the ceiling which reflects an old Nordic tradition of giving offerings for the protection of loved ones at sea.” Regardless, we sat at a bench on the hill for the church and enjoyed the beautiful views of the city and lake, taking a breather from a long day of adventure. By this point it was late afternoon, and we knew we had a long, 200+ kilometer drive to Hvammstangi for the night. We headed back to the car after a little bit more exploring of the town, and began the long drive. As we neared Hvammstangi, we received an email with a passcode to unlock the door at the Hvammstangi Cottages, where we would be staying that night in the hopes to catch the Northern Lights (it didn’t happen, as the timing wasn’t right and it was too bright in the middle of the night to see). We checked in and got settled, noticing that we were the only ones there, and that Hvammstangi was extremely small compared to Vik, Hofn, and Akureyri. Our chosen dinner location was one of the only restaurants in the town: Sjavarborg Restaurant. This restaurant was located on the second floor of the Icelandic Seal Center (unlucky for us, we did not see any seals in the Seal Capital of the World. Maybe next time). The restaurant was beautifully decorated, had extremely attentive staff, and incredible views of the Miðfjörður. I decided to step away from the pizza and burgers routine and ordered the fish soup. It was incredibly tasty and hearty, and just the bowl of soup and bread filled me right up after a long day of excursions. Please note that in all of Iceland, this town had the most sulfur-smelling water. If ordering drinks at Sjavarborg Restaurant, I highly suggest getting something other than water. After relaxing a bit on the banks of the fjord, and perusing the Icelandic Seal Center, we stopped at the local gas station to fill up the Forester and grab some snacks, and then headed back to the cabin for the evening. The cabin was relatively sparse, although had all the amenities we needed. Our only complaint was the bathroom, as the shower was very rudimentary, as well as the door, which, when locked, locked the user in. It took several minutes of fidgeting with the knob to free myself from the bathroom, and with no way to get in touch with the owners of the cabins, I was fearful I would be spending the night in there.

After freeing myself, we settled in, took an inventory, read through the worldly guestbook, set our itinerary for the following day’s journey to Hellnar, and fell asleep.