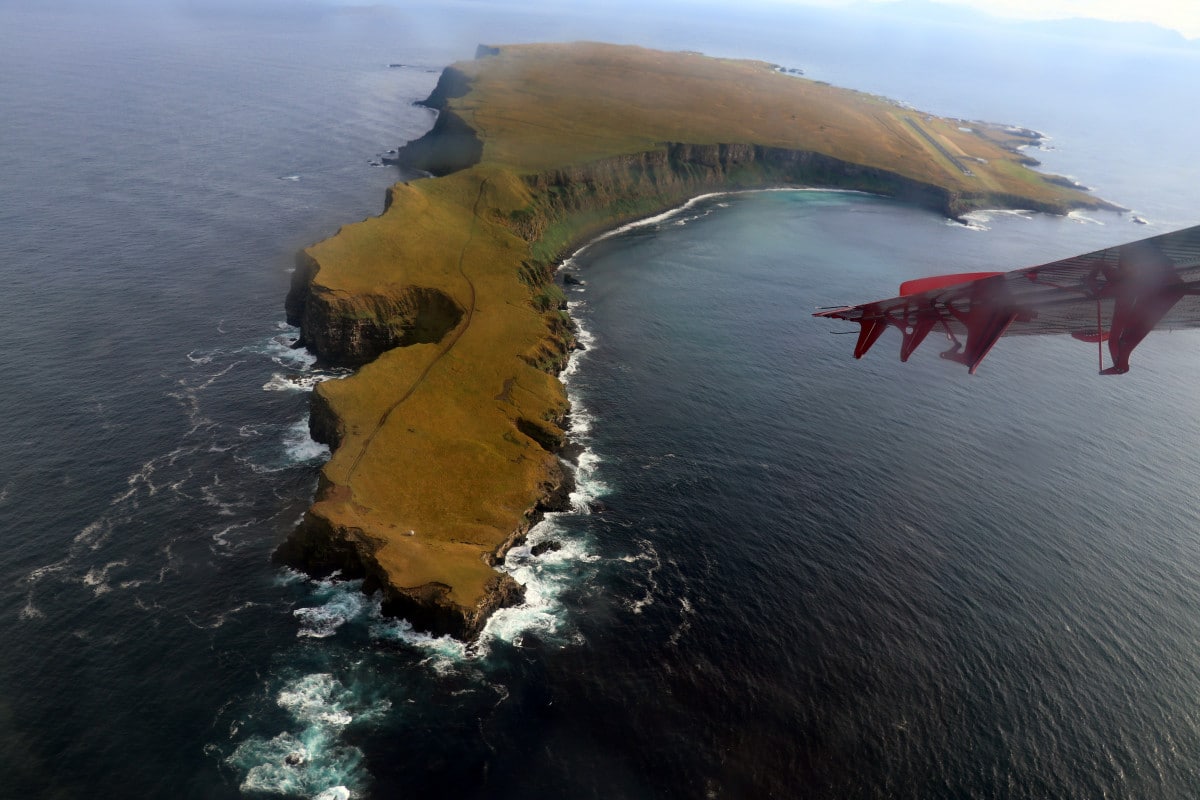 Grimsey is Iceland’s northernmost island, located 41km north off the coast of the mainland. It’s best known for its location on the Arctic Circle, which cuts across the midpoint of the island.

In the warmer parts of the year, the population consists of about 100 residents. During the winter months, the number of people who stay on the island is significantly reduced to near nothing. Grimsey is a fabulous destination for arctic bird watching, as many of Iceland’s bird species can be found there during the summer months.

Other fun things to do on the island include visiting their famous 150-year-old church, seeing the Grimsey lighthouse, eating at the local restaurant, taking a dip in the swimming pool, or visiting the all-in-one community center, school, doctor’s office and library. There are also a few different hiking trails that take you inside the Arctic Circle. Reaching the island can be done by ferry or by airplane. The ferry from Dalvík runs on Mondays, Wednesdays and Fridays from Akureyri. The trip takes about three hours one way. Alternatively, scheduled flights from Akureyri take about 25 minutes. These flights run daily in summer, and three days a week during the rest of the year.

During the summer, when the ferry drops you off, you will only have about five hours to explore the island before it departs back to the mainland. This window of time is shortened during the winter months to between two and four hours, due to decreased daylight.

Things to Do on Grimsey Island

There are plenty of things to do on the tiny Grimsey Island. From bird watching to hiking, visiting old buildings to swimming, dining and lodging, you will be enthralled by what this small land offers. Grimsey Island is abundant with unusually dense populations of a large number of different bird species. The birds flourish on this island due to the rich fishing waters of the nearby arctic sea. There are also no predators like foxes to reduce their numbers. Another reason for the success of these birds is that the collection of eggs on the island has been reduced to a minimum over time.

The most popular bird for visitors to Grimsey is the Arctic Puffin. The island has one of the largest Puffin colonies in Iceland. It is also one of Iceland’s largest Tern nesting sites. The best time to view the birds is from the end of April to the beginning of August.

When the weather starts to get colder, migrating birds will leave the island for warmer places and the sea birds will head out to the ocean. Many sea birds will begin to return to the island near the end of February in order to find a nesting spot in the cliffs. Walking around the entire island can be done in about 4 hours. There are three hiking trails marked with red, yellow, and green colors Each of these hiking path begins near the harbor. The red path is about 5 miles long and should take you about 2-and-a-half hours. The yellow path is slightly shorter, at about 3.8 miles long.

The green path is 2.5 miles and should take you about an hour and a half to complete. The terrain of these hikes can include gravel roads, moors, tracks and paved roads. You’ll be able to visit the Arctic Circle monument, which represents the area where the arctic circle cuts through the island. In the 11th century, an early Icelandic Catholic bishop named Jón Ögmundsson consecrated a church on Grimsey. It was dedicated to St. Olaf, the patron saint of Norway. The present church was built in 1867, mainly constructed from driftwood that washed onto the shore of the island. The church was also extended and renovated in 1932.

Today, many people give donations to the church for good luck. Four times per year, a vicar from the village of Dalvík on the mainland visits to serve in the church. This church is a popular attraction and a big part of the history of the island.

Relax in the Pool

Grimsey’s thermal pool is the perfect place to relax on your visit. It consists of an outdoor pool and hot tub. Hours of operation are on Mondays, Tuesdays, and Wednesdays from 8pm to 9:30pm and Saturdays from 2pm to 4pm. The pool is closed on Thursdays, Fridays, and Sundays.

Where to Eat in Grimsey

Restaurant Krían is the only restaurant in Grimsey. It’s located in the center of the village, overlooking the harbor. It has a great view of the ocean overlooking the northern Icelandic coast.

It’s open every day during the summer, but only sporadically during the other months of the year. Restaurant Krían offers dishes like fresh fish of the day and hot soups for reasonable prices. There’s a stocked bar and the restaurant can seat around 50 people. They also have local exotic delicacies, if you’re in the mood to try puffin.

Where to Stay in Grimsey This guesthouse is in a building called Sólbergi. It’s located above the small gift shop and Iceland’s smallest café. It comes with a good view overlooking the harbor area. They have 6 bedrooms that share a kitchen, living room and bathroom. They have free WiFi and the usual amenities. Gullsól is open year-round, so you can book a reservation any time.

BOOK A STAY AT GUESTHOUSE GULLSOL The Básar guesthouse is located near the Arctic Circle and the airport. This guesthouse has 8 bedrooms with quality amenities and included breakfast. Dinner can be included, but must be pre-ordered. The rooms share a kitchen, living room and laundry facilities. This guesthouse is also open all year.

BOOK A STAY AT GUESTHOUSE BASAR

How to Get to Grimsey To get to the island, you can take the Sæfari Ferry from Dalvík harbor, which is about 40 minutes north of Akureyri. The trip takes about three hours one way in good weather. The ferry always leaves at 9am. The frequency of departure and length of time that it remains in Grimsey varies by the season.

Norlandair offers scheduled flights to Grimsey from Akureyri all year. In July and August, flights run five times a week. During the rest of the year, flights run on Wednesdays, Fridays, and Sundays. The trip takes about 30 minutes. Visit the website for a current list of scheduled flights. Call 354-414-6960 for more.