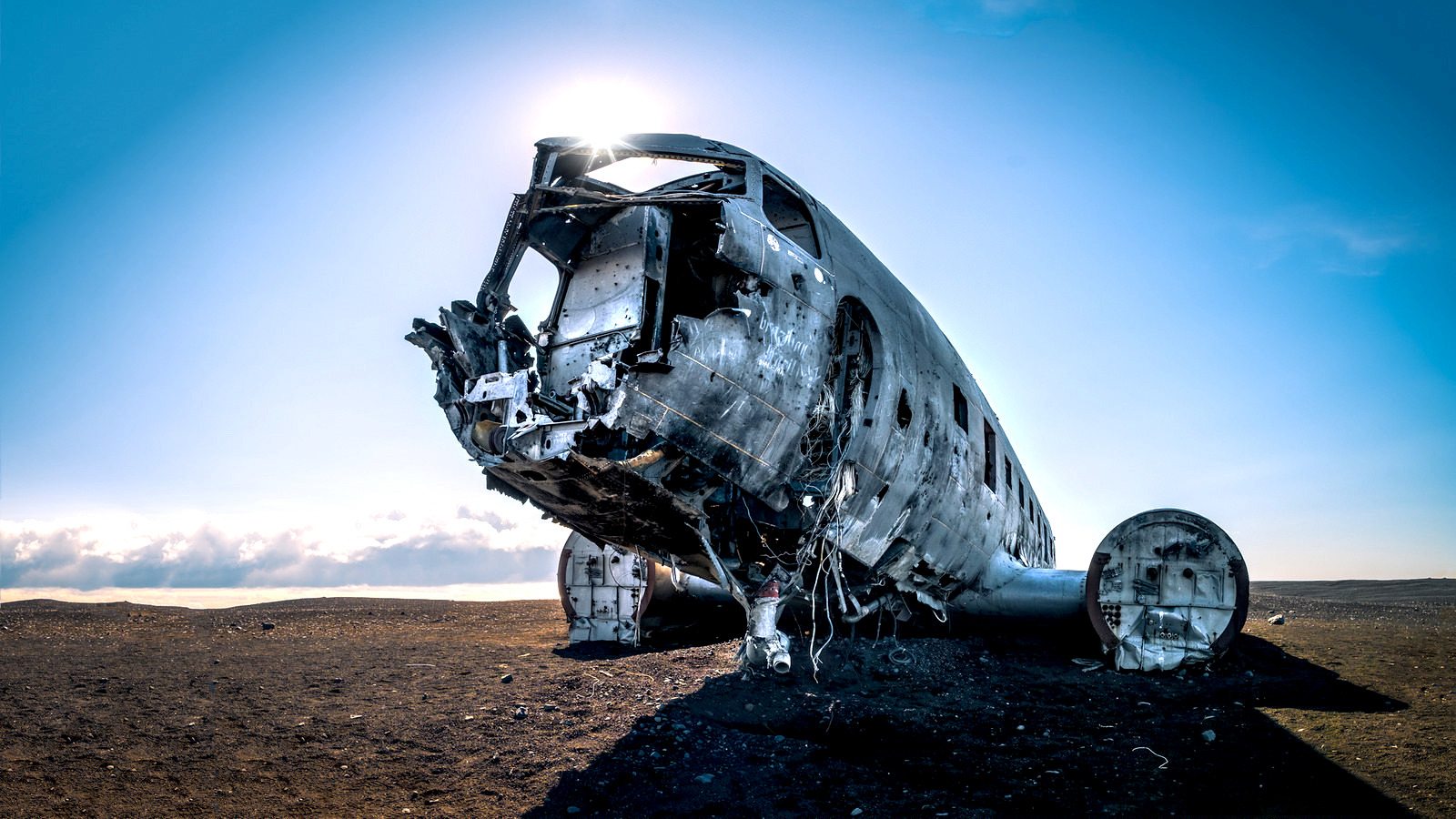 In November 1973, a US Navy Douglas Super DC-3 made a forced landing on the black sand beaches of Sólheimasandur. The cause of this was icing of the engine and control panels. The cabin and crew all walked away, but the plane itself remained on the beach. Today, it sits abandoned and is commonly known as the “Solheimasandur Plane Wreck”.

Getting to the Solheimasandur Plane Wreck

We stumbled upon the plane crash wreckage entrance by accident. It was initially set as the first thing on day two of our 8 Days In Iceland itinerary. We ended up enjoying this attraction as the last item on our first day in Iceland. On the way to Vik from the Skogafoss waterfall, we noticed a parking lot with a good number of vehicles. Off in the distance on a flat path was what looked like our first real glimpse of black sand beach. We could see waves crashing far off in the distance. After parking the Subaru Forester, we ventured out between two large wooden pillars. We noticed that the pathway was wide, and had the yellow reflectors frequently found on the Ring Road for better visibility. Here is what the entrance area for the path looks like: After a little over a half mile of walking in 30 mile-per-hour winds, it clicked for me that we were walking to the Solheimasandur Plane Wreck scene. The beach was not getting any closer, and seemed to be an optical illusion. Until recently, this path was driveable, although the owners of the property recently gated the area off and only allow people to access the wreckage by walking. It’s worth noting that the walk is close to two and a half miles in one direction, five miles round trip. The entirety of the walk consists of the following view: Views at the Scene

The downside is that it is rather boring, especially if you have recently been flying for many hours. The upside is that, provided you walk in on a clear day, visibility is incredible. Eventually (after a solid 40+ minutes of walking), you crest a small hill and are greeted with the Solheimasandur plane crash scene. Although we only passed by maybe 20 other brightly-colored and shivering tourists in our walk out, there were easily 12-15 others standing around, taking pictures, and climbing on the wreckage when we arrived. This is the typical scene at any point in the day here: Several tourists were climbing on top of the plane wreckage and inside the fuselage. Due to the smaller nature of this attraction compared to others we saw in Iceland, it was difficult to get any good photos of the wreckage without brightly-colored jackets in the frame. Here is what the wreckage looks like on the inside, though: I am unsure as to what the inside of the plane looked like when it went down in the first place. I have a feeling that either an official investigation crew gutted the inside of the plane, or that pieces were slowly taken over time as souvenirs. The latter is something that would have been incredibly simple to do back when tourists could drive right up to the wreckage.

Here is what the wreckage looks like from the outside. You can see that there are some very large mountains and cliffs in the background. These will be to your left as you walk towards the Solheimasandur Plane Wreck, and to the right as you walk back to the parking area.: Pros and Cons of the Solheimasandur Plane Wreck

Pros: The Solheimasandur Plane Wreck is probably one of the few plane crash scenes in the world that can be easily hiked to and photographed in its original environment. The scenery is striking with the black sand and gray-white fuselage. It is conveniently located about 11 kilometers east of Skogafoss on Route 1 and 22 kilometers west of the southern Iceland oceanside town of Vik. On the way to Vik, you will also pass by the side roads to Dyrhólaey and the Reynisdrangar Rocks. Overall, the attraction is well aligned with other area attractions regarding ease of access and driveability.

Cons: When it seems as if you are getting close to the beach, you quickly realize that you are not. The pathway to the wreckage barely makes the walk worth the experience of the scene. Even if you pass by few tourists on your way to the Solheimasandur Plane Wreck, prepare for a large number of tourists at the wreckage climbing all over the fuselage and taking photos.

It can be very windy on the way to and from the scene, and with nothing to block, if unprepared you may experience windburn, or get black sand in your face. Also, it is easy to pass by the entrance if you don’t know where to look ahead of time. If you are following our itinerary and traveling south from Reykjavik, this will be the third attraction in a row that is very populated by tourists, even though buses rarely experience the plane wreck, and they are rarely at the parking area.

We cover more on the pros and cons of the Solheimasandur Plane Wreck in our article Three Overrated And Three Underrated Iceland Attractions.

Tips and Pointers for the Solheimasandur Plane Wreck

Additional Links and Information for the Solheimasandur Plane Wreck