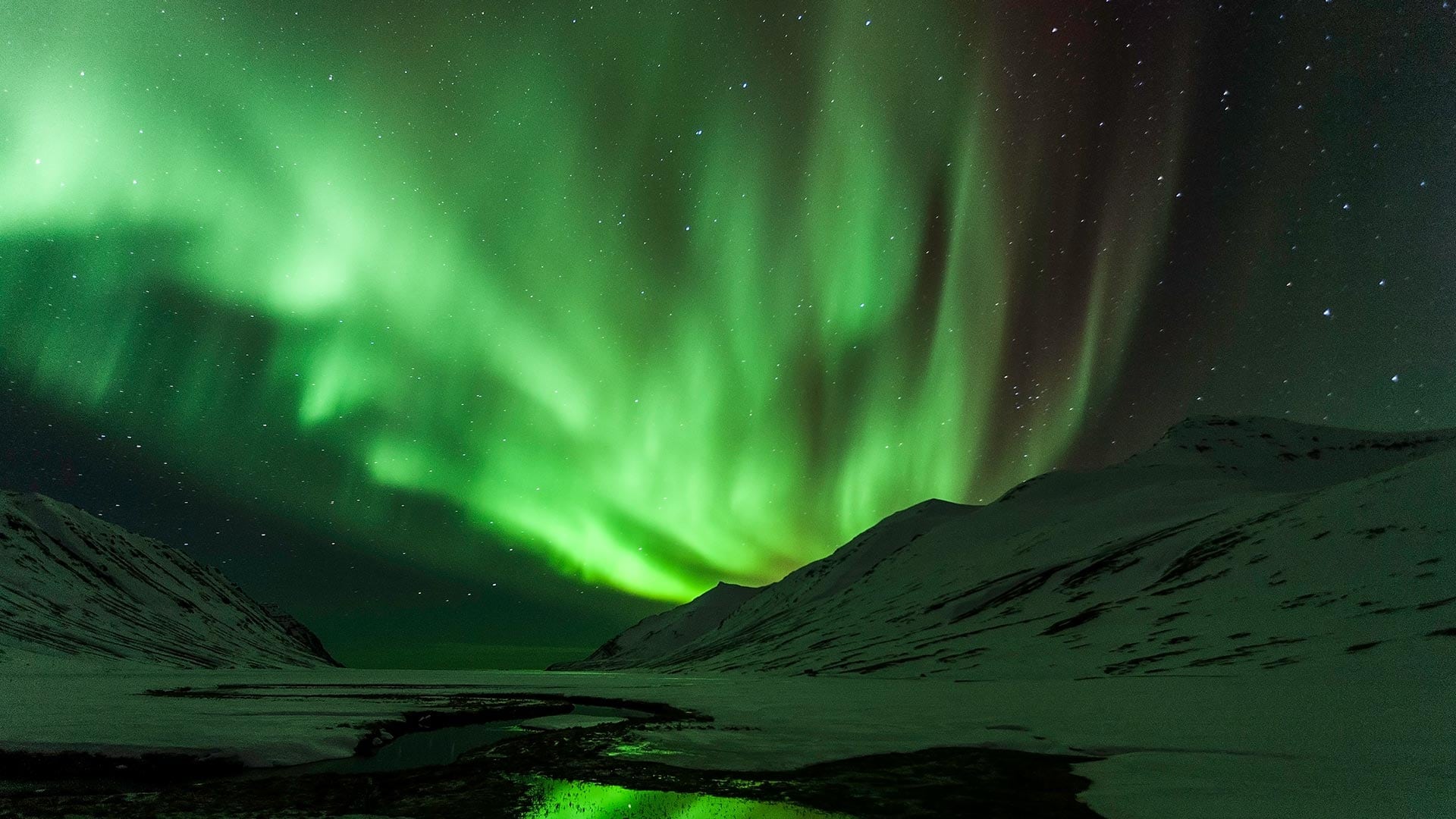 If you’ve always dreamed of seeing the dancing colors of the aurora borealis, or Northern Lights, the skies over Iceland may offer the best views on the planet.

This island nation located on the Arctic Circle’s southern edge, offers dozens of locations where you’re likely to catch this dazzling light show. Its modest population of only about 350,000 keeps light pollution largely at a minimum, making the lights easier to see.

The Northern Lights are the result of electrically charged solar particles colliding with the Earth’s magnetic field. The “solar winds” created by their interaction are drawn toward the Earth’s poles, where they appear to the naked eye as dynamic red, blue and green auras in the northern sky.

The lights tend to be at their most spectacular from November through March in Iceland, when nights are long (darkness lasts up to 19 hours per day during the winter solstice). However, the lights should be easy to spot virtually anytime between September and March, ideally between the hours of 8 p.m. and 2 a.m. If possible, avoid planning your trip during the summer, when it almost never gets completely dark, even at night.

A few days ahead of time, you can check the aurora forecast and the cloud cover forecast to help you plan an optimal viewing schedule. Be sure to look ahead at the phases of the moon as well, since a full moon’s brightness can dim the appearance of the aurora borealis.

Now that you’ve got your timing down, it’s time to select a location for your viewing adventure. Below are a mix of popular spots and lesser-known gems for consideration.

Northern Lights in Reykjavik and Vicinity Attempting to view the lights from the center of Reykjavik—easily Iceland’s most populous city—may cause frustration due to light pollution. However, there are several locations within the city that offer reasonably good views if you’d rather not venture into the countryside. Light pollution is minimal at the Grotta Island lighthouse, located in the city’s northwestern corridor, and it also offers lovely daytime views and birdwatching opportunities. Hljomskalagardur Park may offer sufficient darkness for viewing, along with the area near the Perlan (Pearl) building.

Want to make some new friends? Consider signing up for a Northern Lights tour organized by Reykjavik Excursions or Extreme Iceland. Groups depart nightly from the capital city and are an excellent way to catch the sky show without having to worry about navigating unfamiliar roads.

If you don’t mind driving a bit, Thingvellir National Park is about 40 km from the capital and one of the country’s most popular tourist destinations. Not only is this natural jewel a favored location for aurora-seekers, but it also provides opportunities for hiking, camping, fishing, horseback riding and more. The nation’s first general assembly was established at Thingvellir roughly 1100 years ago and remained the seat of government until almost 1800. It’s a beloved source of national pride for natives, and it’s also included on the list of World Heritage sites for its rich history and cultural value.

Just a bit further from Reykjavik is the famed Blue Lagoon, possibly Iceland’s most well-known tourist attraction. Located in the lava fields of Svartsengi, the lagoon actually began its life in 1976 as a facility for collecting wastewater from the nearby geothermal power plant. Despite this inauspicious beginning, the pool soon developed a reputation for the skin-soothing powers of its milky, mineral-rich waters.

Today, the Blue Lagoon is home to a luxury spa, hotel, café and lounge. It also requires advanced reservations, so make yours here if your Northern Lights vacation aspirations include a healthy dose of relaxation and pampering.

Western Iceland boasts a wide variety of dramatic terrain, from mountain peaks to lava fields, glaciers to ice caves—all of which provide a spectacular backdrop for viewing the aurora borealis.

Snaefellsjökull is the country’s oldest national park and a popular destination for its nearly mile-high volcano, pebble-lined beaches, volcanic crater, enormous lava formations and “singing cave.” Visitors may also recognize it as the setting of Jules Verne’s epic 19th century novel Journey to the Center of the Earth.

Near Reykholt, you’ll want to take time to see the Hraunfossar waterfall, which originates from the Hallmundarhraun lava field. A second waterfall, Barnafoss, is also nearby.

A must-see on the Snaefellsnes peninsula are Lóndrangar, a pair of towering rocks formed from volcanic plugs located east of the Malariff lighthouse. The peninsula is also home to the Pufubjarg cliff, which offers an excellent vantage point for birdwatching.

On the southern edge of the Snaefellsjokull glacier, you’ll find the black sand beaches of Djúpalónssandur, which was once a bustling fishing village but is now virtually uninhabited.

If self-guided exploration isn’t quite your cup of tea, consider investing in a boat tour of Faxaflói Bay. In addition to excursions dedicated to seeing the Northern Lights, there are also whale-watching tours that guarantee a glimpse of the region’s majestic sea life, including minke whales, humpback whales, harbor porpoises and white-beaked dolphins. Iceland’s second-largest town, Akureyri, offers largely unobstructed views of the night sky—perfect for catching a glimpse of the aurora borealis. During the day, it offers multiple opportunities for sightseeing.

This former trading station is filled with fascinating history, much of which has been preserved in the town’s architecture. Don’t miss Laxdalshús, a majestic wooden home that dates back to 1795. Also still standing are the old theater, schoolhouse and hospital, all of which were built in the early 19th century.

Another popular tourist attraction is Akureyrarkirkja, the church whose distinctive towers define the city’s skyline. Dedicated in 1940, the church is set on a hilltop that offers stunning views of the nearby mountains and Eyjafjörður fjord.

Northern Iceland is sure to appeal to visitors with a botanical bent: it’s home to Lystigarðurinn, the northernmost botanical garden on the globe. While its operating schedule is limited—it’s only open from June 1 through September 30—the grounds contain a wide range of both native and foreign plants and flowers.

Located nearby is Kjarnaskógur, a nature-lover’s paradise packed with more than a million trees as well as hiking and biking trails, birdwatching facilities, playgrounds and more.

If you want to combine your Northern Lights-viewing trip with a ski vacation, Akureyri is an ideal destination. The Hlíðarfjall mountains receive an abundance of snow during the colder months, providing a stunning backdrop for the aurora borealis as well as popular slopes for skiing and snowboarding. Gear rental is even available if you’d rather not worry about transporting yours.

Also in the north, Mývatn lake’s stunning surroundings make it an excellent choice for viewing the reflection of the dancing auras on the surface of the water. The result of a volcanic eruption more than 20 centuries ago, the lake is flanked by lava pillars, rootless vents and other volcanic formations.

Finally, add Europe’s most powerful waterfall of places to visit on your aurora borealis odyssey. Dettifoss is more than 45 meters high and 100 meters wide, and the churn of its thundering waters and rocky landscape earned it a starring role in the 2012 movie Prometheus. The Jökulsárlón Glacier Lagoon’s stark icy vistas offer a breathtaking location from which to view the Northern Lights. Here you’ll see massive towers of ice cleave from the Breiðamerkurjökull glacier and drift across the mirrorlike surface of the sea. You’re also just as likely to spot a herd of seals lounging on the ice or feasting on the abundant supply of herring, salmon and trout. A variety of tours are available, including boat, amphibious vehicle, helicopter and even ice-caving excursions.

If you prefer steam to ice, visit the southwest region’s famous hot springs and geysers. Geysir, located in the Haukadalur valley, has been virtually dormant for centuries, but it holds a prominent place in Icelandic lore due to significant activity in the late 13th century. Just a few hundred feet away, you’ll find Strokkur, a smaller but more active geyser that erupts roughly every 10 minutes.

Outdoorsy types may want to plan an extended stay in the massive Vatnajökull National Park, which accounts for 14 percent of the country’s total area. Within the park, you’ll find a sampling of nearly every type of terrain and natural attraction the nation has to offer, including the Vatnajökull glacier; Askja, Bárðarbunga and Grímsvötn volcanoes; Ásbyrgi canyon; and Hvannadalshnjúkur, Iceland’s highest peak at just shy of 7,000 feet.

If luxury accommodations are more your style, consider making a reservation at the plush Hotel Rangá, which caters to visitors hoping to experience the country’s signature sky-show. Located in a rural area, the resort dims its lights to maximize guests’ ability to see the night sky, offers wake-up calls when the auras are in view and provides warm clothing and blankets to help ward off the chill. The hotel even offers a special “Age of Aurora” package during peak viewing months.

Southern Iceland is home to yet another quintessential Northern Lights photo opportunity: the Skógafoss waterfall, which rushes through the rocky base of the Eyjafjöll mountains. By day, you’re likely to spot a rainbow arching over the mist created by the churning waters; by night, you just might see the glowing hues of the aurora borealis dancing above it. If your search for the Northern Lights takes you to the east side of the country, you’ll find an artistic hub in the town of Seyðisfjörður, where the Norwegian architecture reflects the area’s history as a key fishing port. These days, the town prides itself on its creative culture, hosting a popular arts festival every July and the weekly Blue Church concert series throughout the summer.

If you happen to speak French, you’ll feel right at home in Fáskrúðsfjörður, which was an important hub for French fishermen in the late 19th and early 20th centuries. The city continues to cherish its French heritage, with every street sign written in both Icelandic and French. It was once home to a French consulate, French chapel and French hospital, which has since been restored and converted into a French restaurant, hotel and museum.

Also in the east is Lagarfljót, a long, narrow lake that promises picturesque views by day and resplendent reflections of the aurora borealis by night. At 25 km long but only one-tenth that at its widest, the lake and surrounding area can be easily explored via boat or car.

Whether or not you manage to catch the mysterious light show of the aurora borealis on your visit, Iceland is home to some of the most breathtaking beauty on the planet. Still, if your primary goal is to cross the Northern Lights off your travel bucket list, keep these tips in mind as you plan your trip.

2 thoughts on “Northern Lights in Iceland: Best Locations in Each Region”