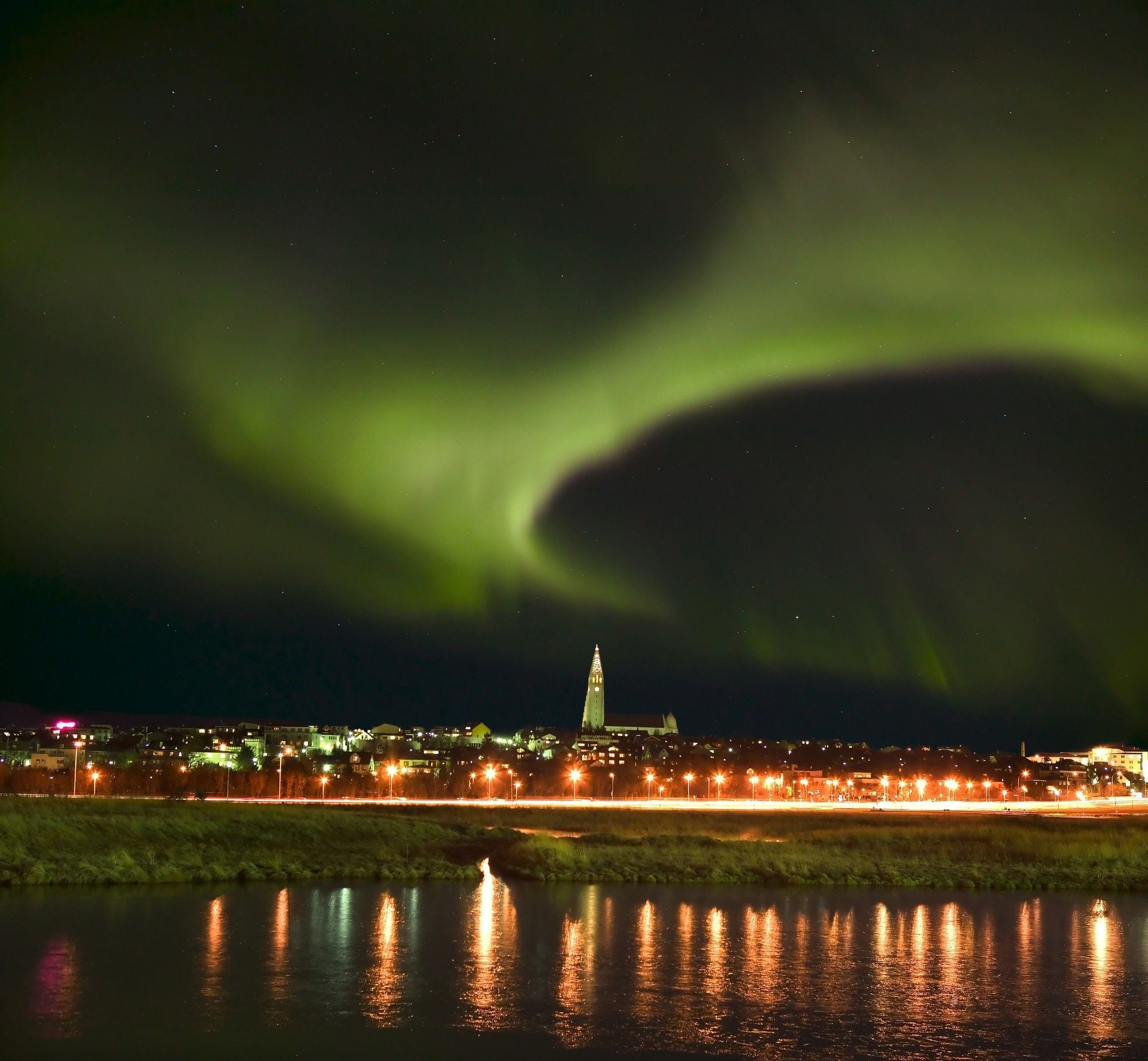 Reykjavik is Iceland’s capital and very close to its only international airport. As such, Reykjavik is a popular destination for visitors to Iceland. About half of the country’s roughly 300,000 citizens live in this metropolitan area. You’ll find plenty of options for entertainment here as a result. These options range from world-class restaurants and vibrant nightlife to impressive architecture and fascinating galleries and museums. Does your vacation bucket list includes catching a glimpse of the famous Northern Lights from Reykjavik? If so, this city provides a surprising number of opportunities for viewing these mystical colors in the night sky.

To maximize your chances of seeing the Northern Lights from Reykjavik, you’ll want to plan your trip from September to mid-April. This is when the skies are darkest and solar activity that causes the aurora is at its peak. Weather is also a significant factor in determining the lights’ visibility. Clouds can obscure their presence, so be sure to check the aurora forecast ahead of time.

Light pollution can interfere with your ability to get the best view of the Northern Lights. Iceland’s largest city, Reykjavik, poses a bit of a challenge to aurora-seekers. However, the following locations in and around the city generally provide sufficient darkness for seeing this otherworldly spectacle. Here are some of the best ways to see the Northern Lights from Reykjavik. This attraction is located at the tip of the Seltjarnarnes Peninsula in the northwestern quadrant of the Reykjavik metro area. Grótta is a popular nature reserve known for its thriving bird population. The lighthouse on the site dates to 1947. It is a mecca for both locals and visitors hoping to see the Northern Lights due to its lack of light pollution.

A nearby geothermal pool provides a place to warm cold feet during the winter months. Additionally, its striking black sand beaches and breathtaking views of the Atlantic coastline make it a destination worth visiting during daylight hours as well.

Grótta is connected to the mainland by a thin strip of land that disappears under water during high tide. For this reason, be sure to consult a tide chart before planning your visit. If not, you may end up spending more time on the reserve than you anticipated.

Elliðaárdalur valley is a hidden gem in the heart of the city. This tranquil recreation area is easy to reach by bus or taxi. It features winding paths that take you past dense forests, colorful wildflowers and even several waterfalls. During fishing season, you can cast a line for the abundant Arctic char, salmon and brown trout that populate the Elliðaá river.

At night, the park is well-shielded from the city lights. Benches scattered throughout the reserve provide a relaxing way to wait for the lights to make their appearance.

Situated on the southeast outskirts of the city, Heiðmörk is a vast conservation area that provides ample open space and low light pollution for viewing the aurora borealis. It offers 18 miles of gravel trails for daytime hikes or cycling; be sure to check out the Rauðhólar (“Red Hills”), an area of ancient craters in the Elliðaárhraun lava field.

Öskjuhlíð is a short drive from downtown Reykjavik. You’ll need to arrange transportation, but it’s worth the effort to get there. Atop the hill is Perlan (“Pearl”), a glass-domed museum built on six water tanks that store much of the city’s hot water. For a spectacular panoramic view of the city, you can buy a ticket to the observation deck on top of the dome.

You may also wish to browse through the exhibits within the world-class museum. These exhibits examine Iceland’s natural wonders. Alternatively, you can catch a show in the new planetarium, scheduled to open in December 2018. On the upper floors of the museum, you can grab a bite to eat at the restaurant and café. You can also shop for mementos of your trip at the gift shop.

Given its impressive stature, the hill itself is an excellent place for viewing the Northern Lights. However, it’s also surrounded by lush woodlands crisscrossed by scenic hiking and biking trails. Additionally, there are the remnants of several bunkers constructed during the U.S. military presence during World War II. Reynisvatn is a relatively secluded lake in the Grafarholt neighborhood. Despite its proximity to Reykjavik, it’s rarely crowded, making it a lovely place to relax by day and search for the Northern Lights by night. Fishing licenses are available on-site, offering visitors the opportunity to angle for char, rainbow trout and salmon during the fishing season.

If you’d rather not leave things to chance, joining one of the many Northern Lights tours available in Reykjavik may be a good option. The guides have years of experience and are familiar with the places best suited for seeing the lights, and you won’t have to worry about logistics or navigation. You’ll also learn about Icelandic history and geography, and you’ll have the opportunity to meet fellow travelers from all over the globe.

The following tours leave from Reykjavik and have earned positive reviews from past visitors:

This boat tour sails into Reykjavik’s Old Harbor, whisking passengers away from the city lights to a prime viewing location on the water. You can grab refreshments at the interior bar and café if you get chilly waiting for the lights to appear, or borrow a pair of the heavy overalls available on board to keep warm. Tours generally last from two to two and a half hours.

This tour takes travelers into the countryside to varying locations based on that day’s forecast. Tours are led by the company’s team of skilled aurora-hunters and last anywhere from three to five hours. If your group is unsuccessful in sighting the lights on your first excursion, you’ll be offered the chance to join a future tour free of charge.

Travel off the beaten path on this “super Jeep” tour, which features experienced guides and custom-built 4×4 vehicles. This is truly an adventure you’ll never forget. The sturdy vehicles provide flexibility in finding the best location for viewing the lights. As an added bonus, the company is committed to providing the most eco-friendly service possible. Tours generally last about four hours.

Whether you choose to join a tour or strike out on your own in search of the elusive aurora borealis, you won’t need to venture far from the capital city to be successful in your quest.

Looking for some other articles about Reykjavik? Check out these gems: