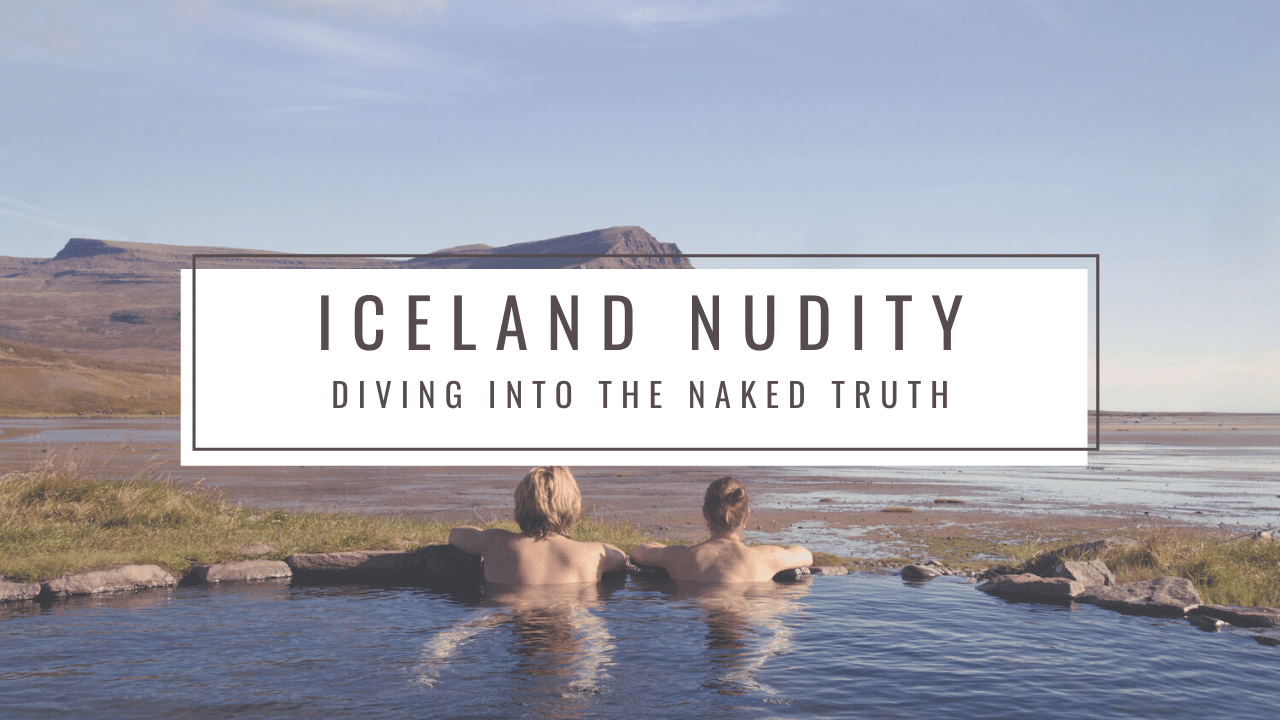 The following is a featured expert post on Iceland nudity from local Icelander Bergljót Eiríksdóttir.

The wonderful, wild, beautiful Iceland. This country raises questions more than just about any country on earth. Is it truly as icy as the country’s name implies? Are those stories about having to completely undress before getting into a hot spring or pool true? What is the country’s stance on nudity?

Discovering the truth in the era of post-COVID-19 can be a bit difficult. However, regardless of the answer to the above, it’s a wonderful indication of an interesting situation regarding being nude in Iceland.

Many factors play in, including setting, culture, traditions, and more. Together, these all play a major role in determining where, when, and how you can and cannot, should and should not, disrobe in Iceland. Let’s dive in!

Digging Into Past and Present Iceland History

This geography lesson is short, I promise, and relevant to the rest of the article.

Iceland is an island country situated on the border of the Northern and North Atlantic ocean, just outside the Arctic Circle. Its name is somewhat deserved, considering the first settlers back in the 9th century stumbled upon a land far less grassy and green, and much more unforgivably cold and snowy.

This period is believed to have been considerably colder in the region than what we experience today, as the Ice Age was still diminishing. The climate eventually became temperate. When this happened, Iceland was blessed with four sunny months of near constant sunlight every day. However, it was too late, and the name stuck.

Aside from summer’s splendor and the Gulf stream’s warm love, Iceland enjoys immense geothermal potential. As such, it is littered with warm pools, springs and spa resorts such as the Blue Lagoon and Myvatn Nature Baths.

We can end the geography lesson here, though, and get to the more interesting part of this article.

Iceland Nudity at the Blue Lagoon and Myvatn Nature Baths

We get a lot of questions here at Iceland In 8 Days. One of the most common question relates to what is required for preparation before soaking in the beautiful Blue Lagoon.

The Blue Lagoon is one of the most popular spa resorts on earth. It is a massive, highly commercialized man-made geothermal spa, and is likely the most frequented destinations for tourists in the whole beautiful country. We have an incredible thorough, in-depth guide to the Blue Lagoon, which can be found here.

Despite the impressive popularity, ample resources online, and bustling atmosphere, there are a few Iceland nudity controversies and questions that surround the Blue Lagoon. To clear things up, let’s get one thing out of the way: no, you cannot enter the Blue Lagoon naked. The same rings true for the Myvatn Nature Baths.

Much of the questions and concerns around this come from the step that comes before sinking into the warm, opaque blue waters: the shower room.

Those who visit the Blue Lagoon are required to shower naked before entering into the spa. This is due to the strict hygiene policies that are common among public geothermal spas and swimming pools in Iceland.

The showering area inside the Blue Lagoon has a few private stalls, with either curtains or doors to separate your body from the potentially-prying eyes of your peers. However, for many, the scrub-down will occur in front of same-sex peers. At the Myvatn Nature Baths, everything is open, so don’t expect to find yourself a quiet, dark corner to change and shower in.

Shower areas at both the Blue Lagoon and Myvatn Nature Baths are separated into male and female, so guys, don’t expect to be prancing among naked Icelandic women here, because that simply isn’t going to be happening!

But why are these shower and locker room areas so open? Well, this goes back to the culture of the country. Icelanders are extremely communal people. In fact, 98% of Icelanders surveyed in a study stated confidently that thy have someone they can rely on in times of need. Icelanders like being around others, and this is reflected in their view and arrangement of locker rooms and shower stalls.

The Importance Of Showering Naked

Private showers would provide visitors who may not be as open to disrobing the change to be inconsiderate and dishonest with their personal hygiene. But, you may be wondering, why is getting naked to shower off so important before getting into these geothermal spas?

These geothermal spas, even with their high traffic, are notoriously spotless and clean. The water is incredibly high quality, even being very low in chlorine and antibacterials, and a far more natural feel. Going into places such as the Blue Lagoon and Myvatn Nature Baths without fully showering off taints this water with whatever you’ve brought in with you. In many cases, people will enter these areas after a long flight or a day of hiking. Nobody wants to swim in that.

However, don’t let these things dissuade you from visiting if you are uncomfortable disrobing in front of strangers. We have all been there, especially those of us who come from less open countries such as the United States. However, don’t despair. Both locations have ways you can protect your privacy.

Regardless, Iceland is quite mature about things such as public Iceland nudity. Additionally, there is an unspoken rule in Iceland which dictates that you should not stare at other people in the changing room.

Note: While wearing a swimsuit in these more public geothermal spas and swimming pools is universally mandatory, it only applies to your bottom half, regardless of gender. Women are not legally required to wear a bathing suit top. However, despite this, you are very unlikely to see women in Iceland baring everything on top in a public setting.

Thoughts on Iceland Nudity in Other Geothermal Areas

Iceland is one of the most common geothermal wonderlands on Earth. This beautiful country is speckled with geysers bursting upwards, bubbling mud pots, and steamy hot springs. Many of these geothermal areas are at the ideal temperature for bathing and relaxing. Some of these are incredibly remote, so much so that you can hop in naked and have the place all to yourself.

However, before you think about engaging in a unique nude Iceland experience in a hot spring, there are a few things that you need to keep in mind.

Be Wary of the Temperature

Many hot springs in Iceland are empty for a reason: they are incredibly hot, far too hot to bathe in. This being the case, you should only bathe in springs that are safe to enter. Remember, dipping a hand in won’t provide the insight necessary to determine if you’re good to submerge yourself fully.

After all, some of the hottest water is just a couple feet beneath the surface of many of these springs. If you’re partaking in some Iceland nudity, you could be in for an especially bad time.

Additionally, even when the water in a geothermal pool in the middle of nowhere might seem like it is the ideal temperature, that doesn’t mean the world around it agrees. An unstable geography country-wide means that these pools can heat up quickly with zero warning. Heck, even Ed Sheeran isn’t immune to hot springs burns.

It is important to note that Iceland, in the global landscape, is still an extremely young country. As a result, it is still being formed, and has volatile environments just below the surface. One of the most popular hot springs in Iceland is a cave/grotto called Grjótagjá in the Myvatn area (as featured in Season Three of Game of Thrones). It has been known to heat rapidly from time to time. This is why bathing in Grjótagjá is completely off-limits.

Also Be Wary of Bacteria

There is no arguing that Iceland is a very clean country. However, despite this, there are some hot springs in Iceland that are chock full of harmful bacteria. Remember, these hot pots out in the middle of the mountains typically won’t have sophisticated treatment systems like you would find in tourist-focused geothermal spas and local area swimming pools in Iceland.

Of particular notoriety are hot springs located on the Reykjanes Peninsula and in the Westfjords, where things are incredibly remote. One well-known example of this is Fréttablaðið.

In fact, there are some hot springs in the area where older Icelanders and travel articles may consider safe, but are now not fit for bathing. This is due to the heightened amount of bacteria present in the water, mainly from tourism-related causes. Even around August and September, hot springs in popular bathing areas such as Hveravellir and the Landmannalaugar highlands are too contaminated to soak in.

For the most part, young children, pregnant women, and people who may be immunocompromised should generally avoid bathing in rural hot springs. Better safe than sorry, right?

But What About Getting Naked?

Basically all of the rural, less-travelled hot springs in Iceland that are safe to bathe in can be entered nude. Many of those, especially in the East and North areas of the country, are typically quiet enough to have the place to yourself.

However, even if you are startled by company when practicing some Iceland nudity, don’t you worry. Many Icelanders completely understand the skinny-dipping common in these hot springs. Odds are they have likely done the same!

In Iceland, bathing naked is not considered to be a sexualized experience, but instead a connective experience with nature. In addition, Iceland nudity in rural hot springs are a great way to not have to pack wet clothes in and out, and significantly lightens your laundry, which is extremely beneficial when camping or traveling by camper van.

Now, if you get to a hot spring with the goal to shed your clothes and become one with nature, there is always a chance you won’t have the place to yourself. This is becoming more and more common as Iceland tourism continues to grow. If this is the case, common courtesy is to ask if they mind if you relax in your birthday suit.

People are going to react differently. To some, an Iceland nudity experience may cross the line into indecent exposure. For others, especially locals and other Europeans, it’s par for the course.

Looking for a way to avoid company when looking to bathe nude in some remote hot springs? Travel at night time in the summer for starters. Typically, when the “midnight sun” is out, the crowds tend to be far smaller, even if it’s the height of the tourist season.

Alternatively, renting a four-wheel-drive vehicle and experiencing hot springs in the winter is a true once-in-a-lifetime experience that few attempt. The odds are high in winter that you’ll get that remote hot spring to yourself. Just be careful sliding around naked in the snow when getting into the hot spring. Frostbite is no joke!

Our Final Thoughts on Iceland Nudity in Hot Springs and Spas

The free attitude that Iceland has as it relates to nudity largely comes from a mix of this hot spring culture, historic cultural traditions, artistic experimentation, the rise of feminism, and an overall free focus in the eyes of Icelanders. The open-mindedness on Iceland nudity extends well past hot springs and geothermal spas, too.

It doesn’t matter if you’re a frequent nude bather or extremely hesitant and shy to disrobe in front of others, the spa experience in beautiful Iceland is something that needs to be truly experienced.

Having a bit of information about the lack of taboo around Iceland nudity can help alleviate some of the stress, concern, and questions associated with getting naked in stunning Iceland.

2 thoughts on “Iceland Nudity: About Getting Naked in Iceland in 2020”