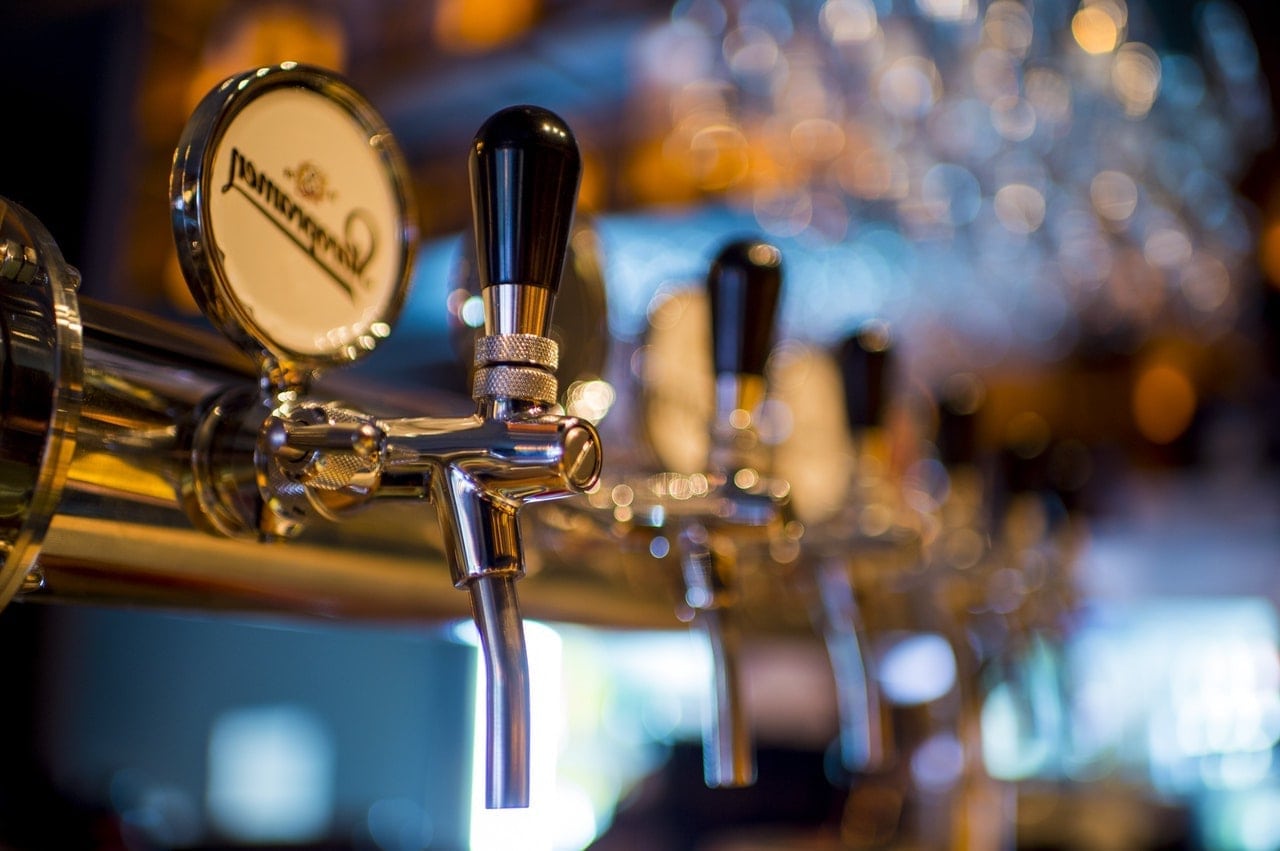 Whether you’re a casual beer drinker or an ale aficionado, a tour of breweries is an interesting—and intoxicating—way to experience the culture of a country like Iceland. Despite the fact that beer was prohibited in Iceland from 1915 until 1989, the Nordic nation now hosts a thriving beer industry made up of several major Iceland breweries and about a dozen microbreweries.

Most of the country’s breweries offer facility tours, or if you’d like someone else to do the planning, several tour companies offer beer-centered excursions as well. Read on as we review the best Iceland breweries this beautiful country has to offer. Founded in Reykjavik in 1913, Ölgerðin is one of the oldest and largest companies in Iceland. In addition to beer, the company also produces soft drinks and Brennivin, a popular Icelandic clear liquor.

Ölgerðin literally means “brewery” in Icelandic, so it’s no surprise that beer is the company’s main focus. One of its very first products was Egils Pilsner, created in 1917. Although it was illegal to produce or sell beer in Iceland at that time, the company made and served it to British and American soldiers during World War I.

Since then, the company has developed several international award-winning beers, including Gull (chosen World’s Best Standard Lager at the 2011 World Beer Awards) and Brio (named Best German-Style Pilsner at the 2012 World Beer Cup).

The two-hour Ölgerðin tour includes a fascinating discussion of the history and culture of alcohol in Iceland, a guided tour around the brewing facility and a comprehensive sampling of a wide range of the company’s beers, as well as a shot of Brennivin and a taste of the non-alcoholic beer consumed by many Icelanders during the prohibition years.

The Ölgerðin experience is available through several tour companies, including Tours4Fun, for about $70 USD, which includes shuttle service to and from most hotels and guesthouses in Reykjavik. Located just outside Selfoss in south Iceland, this former dairy farm turned microbrewery was founded in 2007 by a pair of beer-loving farmers who also happened to be neighbors. The Ölvisholt brewery tour includes the majestic scenery of the surrounding area, and visitors might even catch a glimpse of an eruption from the active Hekla volcano, which inspired one of the brewery’s flagship beers. Lava, Ölvisholt’s smoked imperial stout, is popular not only in Iceland, but throughout Scandinavia, and is now being introduced in the United States and Canada.

An old cowshed on the property has been repurposed as a taproom, which serves freshly-brewed beer as well as individual and group tours. Hours are limited—noon to 3:30 p.m. Monday through Friday and noon to 4 p.m. on Saturday—so plan accordingly. Tours are offered at 11 a.m. and 2 p.m. daily and last 30 to 40 minutes, covering the brewery’s history, the brewing process and of course, beer sampling. After-hours tours are available for groups of 15 or more but must be booked in advance. Kaldi was founded in the tiny town of Árskógssandur by husband-and-wife team Agnes Anna and Olafur Trostur. After a knee injury ended Olafur’s 26-year fishing career, Agnes saw a television piece about the growing popularity of microbreweries and convinced Olafur that their town’s crystal-clear mountain water would be the perfect foundation for a microbrewery of their own. They brought on Czech brewmaster David Masa and began brewing pilsner-style beer in 2006. Though their production has grown since then, the brewery still uses ingredients sourced from the Czech Republic and the pure mountain water from the nearby Sólarfjall peak in every batch.

Kaldi offers about 10 different beers. The company’s very first brew, Kaldi Blond, is a golden lager that now holds the distinction of being the best-selling bottled beer in the country. Dark beer lovers will enjoy Kaldi Dark, a deep brown pilsner rich with the flavors of caramel and roasted malt.  Nordan Kaldi and Stinnans Kaldi are both quality English ales, while Páska Kaldi is a sweet malt Bock balanced with the sharpness of Wakatu hops.

One-hour tours are offered daily and include a company history, facility walkthrough and beer sampling as well as a keepsake glass. Founded in 2010, Reykjavik-based craft brewery Borg Brugghús prides itself on using local ingredients and infusing its beers with Icelandic cultural influences. The company offers nearly six dozen varieties of beer, including Gissur, a sour ale heavy with fruit notes; Surtur, an imperial stout aged in bourbon and Cognac casks and laced with cacao bean husk and chipotle pepper; Luther, a hoppy blond ale crafted for the 500th anniversary of the Reformation; Gunnlöð, a mead brewed with honey from Lithuania; and Magðalena, an imperial wit packed with the flavors of orange marmalade, lemongrass and coriander.

While the Borg facility doesn’t offer public tours, a fun way to experience the brewery’s wide range of products is with the Reykjavik beer tour on the Beer Adventures app. The two-kilometer (1.3 mile) walking tour starts at the city pier and incorporates popular sightseeing stops as well as some of the city’s best bars and taprooms. Best of all, it’s free, and you’ll get some fresh air and exercise to help offset the liquid calories you’ll be enjoying. The Einstök Ölgerð brewery is nestled in the fishing town of Akureyri, just 60 miles south of the Arctic circle. Brewed with the icy, pure water that flows down Hlíðarfjall Mountain from the glaciers above, the company’s beers are enjoyed throughout Iceland and in more than 20 other countries around the globe.

Einstok is another brewery that unfortunately doesn’t offer facility tours. In fact, it’s actually bottled by beverage giant Vífilfell. This distributes Coca-Cola products in Iceland as well as Viking beer, local fruit juices and a chocolate milk drink. However, you can sample their brews at most bars in Akureyri. This includes Götubarinn and Ölstofa Akureyrar, as well as hotels, pubs and eateries across the country. Hailed as Iceland’s first microbrewery, Bryggjan Brugghús is located along the harbor in Reykjavik. In addition to the brewery, Bryggjan operates an onsite bistro. This bistro features a menu that emphasizes freshly-caught Icelandic seafood and other dishes to complement their brews.

The bar features 12 pumps that bring in fresh beer directly from the brewery. Choices include:

Guests in the bistro may catch a glimpse of the brewing process through the glass walls that overlook the brewery. Be sure to take advantage of the opportunity to go behind the scenes with Gray Line’s Bryggjan Brugghús tour. The daily tours start on the hour from 1 to 10 p.m. It provide guests with an overview of the brewery’s equipment, processes and products, as well as insights into the country’s fraught history of prohibition and the blossoming beer culture in Iceland. Ölverk is located in the town of Hveragerði along the famous “Golden Circle,”. This is a popular tourist trail in southern Iceland that includes Þingvellir, Geysir and Gullfoss. Given its proximity to several geysers, it should come as no surprise that Ölverk’s modest brewery is powered entirely by geothermal energy. In addition to house-brewed craft beer, the companion bistro specializes in wood-fired pizza, giant soft pretzels and other hearty accompaniments. Gæðingur Öl Brugghús is a microbrewery located on a farm in Skagafjörður, a town in southern Iceland. The brewery’s offerings include a staggering 125 beers, including:

While you won’t be able to tour the farm facility, you’ll find several of Gæðingur’s beers on tap at Microbar in Reykjavik, along with other Icelandic and imported brews. Brugghús Steðja is located in Hvanneyri on Iceland’s west coast. The name, which means “anvil,” is an homage to a rock formation next to the brewery and family home.

Steðja brews a dozen regular and seasonal beers. Among these are:

The brewery’s Hvalur varieties, which were initially created for the country’s traditional Porri midwinter festival, have generated some controversy due to the inclusion of milled whale bones and whale testicles in the recipes.

The brewery offers group tours and also operates a tasting room.  This room is open from 1 to 5 p.m. Monday through Saturday.

With craft breweries popping up all over Iceland, you’re sure to run across one in your travels. Be sure to save a few hours for a tour or sampling. This will help you to get a unique perspective on this booming area of Icelandic culture.

Interested in more articles on Icelandic food and drink? Here are some great options!

1 thought on “Drink Up! The 9 Best Breweries We Have Found in Iceland”