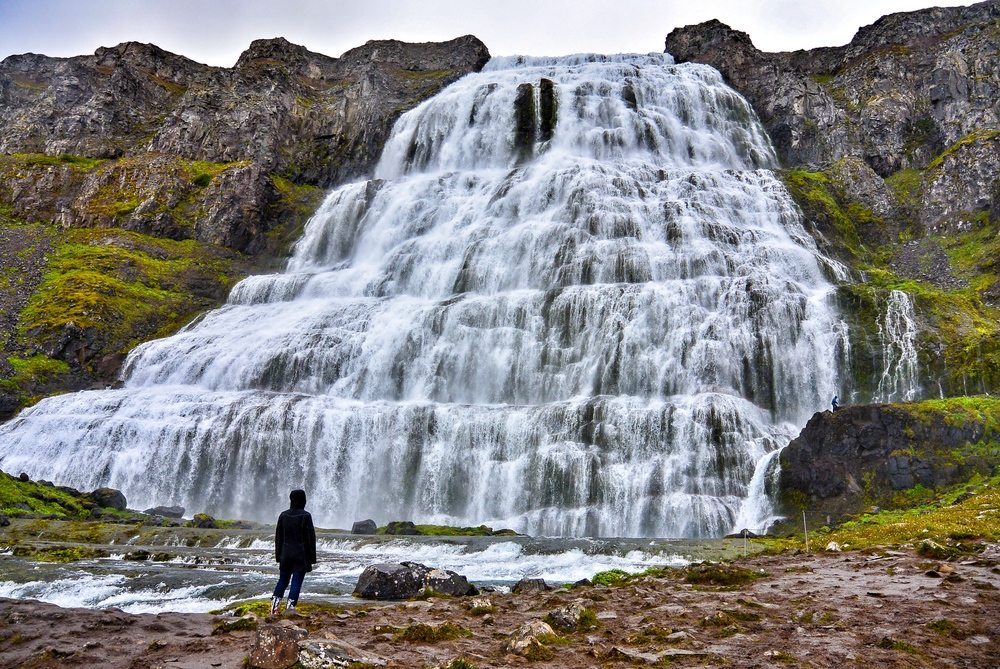 About the Dynjandi Waterfall in the Westfjords

The Dynjandi waterfall cascades nearly 324 feet. The top of the waterfall is almost 100 feet wide and it widens on the way down reaching nearly 200 feet at the bottom making this an incredibly massive waterfall, even by Icelandic standards.

Strolling Along the Short Dynjandi Hike

If you decide to see this beautiful sight, you will have to take the Dynjandi hike – a breathtakingly scenic route – to reach it. On your way up, you will encounter six waterfalls before the Dynjandi, each more astonishing than the last. The Dynjandi is some 650 feet high and takes only 15 minutes to reach, but you have six additional chances to take a break at another waterfall on the way up.

The rocky pathway leading to the Dynjandi was built by volunteers in 1996. It is a little rough, but the hike is very short. Almost anyone should be able to make the 15-minute hike.

Dynjandi is an Icelandic term for thunderous or resonant, and when you hear its amazing thunderous waves crashing against the rocks on the way down, you will understand how this waterfall got its name. Many in Iceland believe that all waterfalls have a supernatural being living in them. After experiencing this waterfall, it is easy to see why.

All of the waterfalls that you will find on your way up to Dynjandi come from Lake Stóra-Eyjavatn, which is 1000 feet above sea level. The Dynjandisá river flows into this lake and often times there can be seasonal flooding. It’s hard to imagine how the Dynjandi would look while the river and lake were flooded.

Vivid colors and bright rocks make the Dynjandi a truly unique waterfall. Bright greenery and mosses beneath the water give it a feeling you won’t experience anywhere else in the world, and the bright red rocks are brighter than anything I’ve ever seen. The rock and soil are ancient in age and can be found to hold some archaeological remains.

On your way up to see the Dynjandi, you will find remains of outhouses and farms scattered along the bright red rocks from long ago. Hidden among the historical remains on the way up you will find a pool called Dynjandislaug pool. It’s not easily sighted from the main paths and you shouldn’t leave the paths at any time as to preserve the wildlife, but for those who are willing to look for it, there is a beautiful pool waiting to be admired from a distance.

There is a gravel road across the top of the Dynjandi that provides an astonishing top-down view of where it all begins. There are several smaller waterfalls here that you can stop to admire on your trip to see the Dynjandi making it a popular stop for visitors.

During the colder seasons, parts of the Dynjandi and the surrounding area are closed due to snow, ice, or other weather conditions. Be sure to keep yourself and the scenery safe by staying on the paths at all times and obeying any signs you may encounter.

The Magnificent Dynjandi Waterfall – the Jewel of the Westfjords of Iceland

Iceland On The Web Dynjandi Waterfall and Westfjords Tours