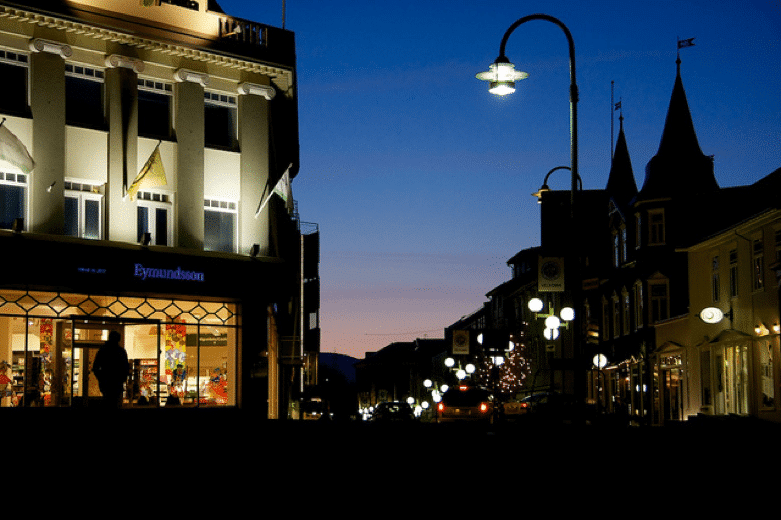 When planning a visit to Iceland, many tourists focus primarily on the capital city of Reykjavik, which makes sense—it’s a 40-minute drive from the nation’s only international airport and its most populated city, with the requisite number of hotels, restaurants, pubs, museums and other cultural attractions. However, visitors with more than a few days to spend in-country should consider a trip to the charming town of Akureyri, widely known as the “Capital of North Iceland.”

It’s also Iceland’s second-largest metropolitan area, although with a population of just under 20,000 people, it’s unlikely you’ll feel crowded during your visit. If you make the roughly five-hour journey between Reykjavik and Akureyri, be sure to check out the destinations that made our list of the top 10 things to do in Akureyri. Akureyri is located along the Eyjafjörður fjord, a long, narrow waterway that’s home to several varieties of whales and other marine life, including humpback whales, minke whales, dolphins, harbor porpoises, killer whales (orcas) and seals. In addition to these majestic creatures, you’ll also enjoy spectacular views of Súlur, the town-mountain of Akureyri, as well as lush valleys and breathtaking coastal landscapes.

A number of tour companies offer whale-watching excursions in and around Akureyri, including: This towering Lutheran church is an iconic symbol of Akureyri. Located in the town center, the building was designed by architect Gudjon Samuelsson and consecrated in 1940. It includes several impressive architectural features, including a stained-glass window from the old Coventry Cathedral in England, which was destroyed in an air raid during World War II.

Made of white Italian marble, the baptismal font is an exact replica of the one in Our Lady’s Church in Copenhagen. The altar piece above the font came from the very first church constructed in Akureyri in 1863; painted by Danish artist Edvard Lehmann, it was gifted to the church in 1867.

Just behind the church is the Akureyri swimming pool. You might be wondering why a public pool merits mention on a top 10 list of tourist activities, but rest assured that public swimming pools in Iceland are an entirely different experience from your local community pool in the United States.

In addition to two 25-meter outdoor pools, the property boasts an indoor pool, a splash pool, water slides, four hot tubs, a steam bath, a sauna, water jets and more. All of the pools are heated with natural geothermal water, with temperatures ranging from a chilly 41°F to a steamy 110°F. There’s also an expansive outdoor lounge area perfect for sunbathing during summer and playing in the snow during winter.

The price of admission is less than $10 for adults and less than $3 for children, making it an affordable destination for the entire family. And in case you forgot to pack your swimming essentials, the pool even offers a package that includes admission, swimsuit rental and towel rental for less than $20. If you happen to be visiting Iceland during the summer months, be sure to make time for a visit to the country’s top botanical garden, Lystigardurinn. Located just 60 miles south of the Arctic Circle, the park is one of the world’s northernmost botanical gardens and features more than 6,000 varieties of Icelandic, Arctic and international plant life.

The garden is open June 1 through September 30, and admission is free. In addition to the impressive selection of flora, the park features picturesque scenery like shade and sun gardens, fountains, a pond with an arched bridge and rock gardens. There’s also a charming café on-site where you can relax with coffee, dessert or a light lunch. History buffs will enjoy a stop at the Laufás turf homes, which were built in the mid-1800s and remain some of the most well-preserved evidence of how Icelanders lived in centuries past. This former farm site is counted among the National Museum’s Historic Buildings Collection and is managed by the Akureyri Museum

Located on the outskirts of town, the property includes a dozen dwellings built from a combination of timber, stone and turf. They housed as many as 30 people during the farm’s peak as a wealthy vicarage well into the 20th century. The furnishings inside date to around 1900. For such a small town, Akureyri is home to an impressive number of museums and other cultural attractions. A 10-minute drive from town center, the exterior of the house at the Christmas Garden looks like something pulled straight from the lyrics of your favorite holiday carol. When you walk in the door of the festive red cottage, you’ll be greeted with a roaring fire and the scents and sounds of the season. There you’ll discover Christmas decorations from all over the world as well as traditional Icelandic Christmas items crafted by local artisans. Climb the stairs to the upper level of the house to see the world’s largest Christmas calendar. The picturesque garden adjacent to the house features tables and benches, making it a lovely place for a picnic lunch.

No matter what time of year it is, you’ll want to be sure to include the Christmas Garden in your stay in Akureyri. After all, this is the closest you’ll probably ever get to the North Pole! Located along the Eyja Fjord and surrounded by mountains, Akureyri is home to some spectacular scenery, and horseback is an excellent way to experience it.

Horseback tours of various lengths are available, and you don’t need any prior riding experience to thoroughly enjoy the relaxed pace of these sightseeing excursions. Hestaleigan Kátur offers one- to two-hour tours daily year-round for riders of all ages. Saga Travel’s one-hour ride, available May through October, is perfect for beginners and includes complimentary coffee, tea and cake as well as use of the hot tub at the Skjaldarvík Guesthouse. Located just next door to Akureyri, Hlíðarfjall provides much more reliable snowfall than the southern part of the country, where the lack of snow can mean the local ski resort Bláfjöll is open for only a few days out of an entire season.

In contrast, Hlíðarfjall in the country’s snowy north can offer fantastic skiing almost half the year. The resort is equipped with seven ski lifts and 23 alpine slopes, with the longest trail clocking in at more than a mile long. All of the main runs are floodlit to allow skiers to stay on the slopes well past sunset. Two on-site cafeterias keep skiers fueled with hot and cold foods, soups and desserts.

Day passes run around $45 for adults and $15 for children, with equipment rental available for an additional fee. Downtown Akureyri is the pulse of the city, packed with a wide variety of cafés, restaurants and shops. Here, you can sample nearly any kind of cuisine, from traditional Icelandic fare to sushi featuring freshly-caught local fish. Many pubs and restaurants also feature live music on various nights of the week, providing an additional taste of regional culture. Of course, no visit to any part of Iceland would be complete without an attempt to catch the stunning aurora borealis, also known as the Northern Lights. Given its relatively small population and minimal light pollution, Akureyri is as good a place as any for a sighting. However, this is one activity that’s best saved for the winter months, since Akureyri’s location near the Arctic Circle means almost constant daylight during the summer but very long nights in winter.

While it may not be quite as popular with tourists as capital city Reykjavik, Akureyri definitely deserves a spot on the list of must-see destinations in Iceland. If you’ve visited any of the places in this article—or have other suggestions for visitors to the town—be sure to let us know in the comments.

We passed through Akureyri on Day 5 of our Iceland journey.